'What the f*ck are you doing?': NYC woman hilariously shames subway masturbator 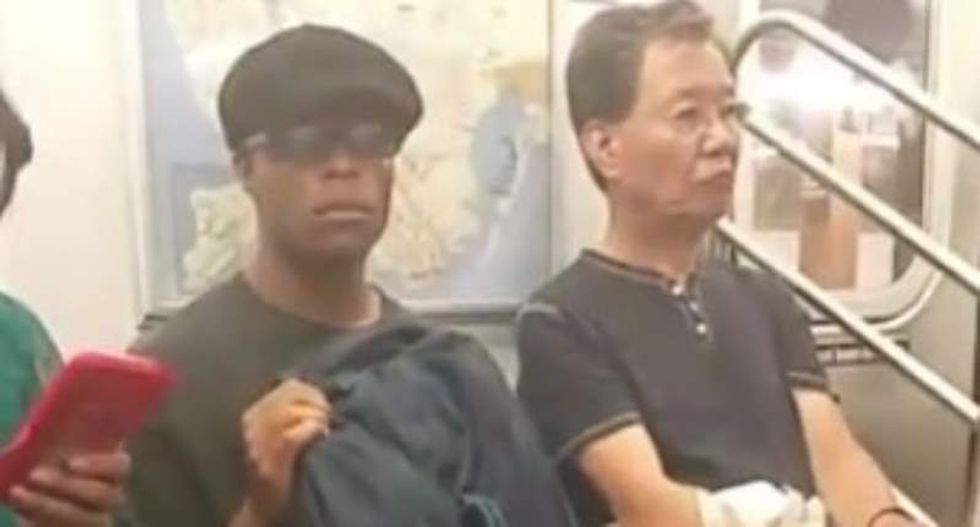 The unidentified man on the left reacts after being caught touching himself on a New York City subway train in video posted on Aug. 15, 2016. (Facebook)

A New York City woman has amassed widespread attention after posting video of herself berating a man apparently touching himself on a subway train, Attn reported.

Deanna G. Carter's video opens with her filming the unidentified man, who is seen wearing a hat and sunglasses with a backpack on his lap.

The man doesn't deny the allegation, prompting Carter to order him to stop.

The man nods silently in the affirmative and clutches his bag, but Carter continues to slam him.

"I'm in one of those moods -- I will f*ck you up on this train," she says, before ordering him to "get the f*ck off" at the next stop. Seconds later, he gets up and follows her orders.

"Sitting here rubbing on your penis. Are you serious?" she asks.

The video has garnered more than 1 million views since Carter posted it to her Facebook account on Monday, and has been shared nearly 20,000 times.

Attn noted that, according to a worldwide study conducted last year by the anti-street harassment advocacy group Hollaback, 82 percent of female respondents in other countries said they changed their travel patterns in their home cities because of harassment.

Watch the footage of Carter confronting the man on the subway, as posted on her Facebook page, below.