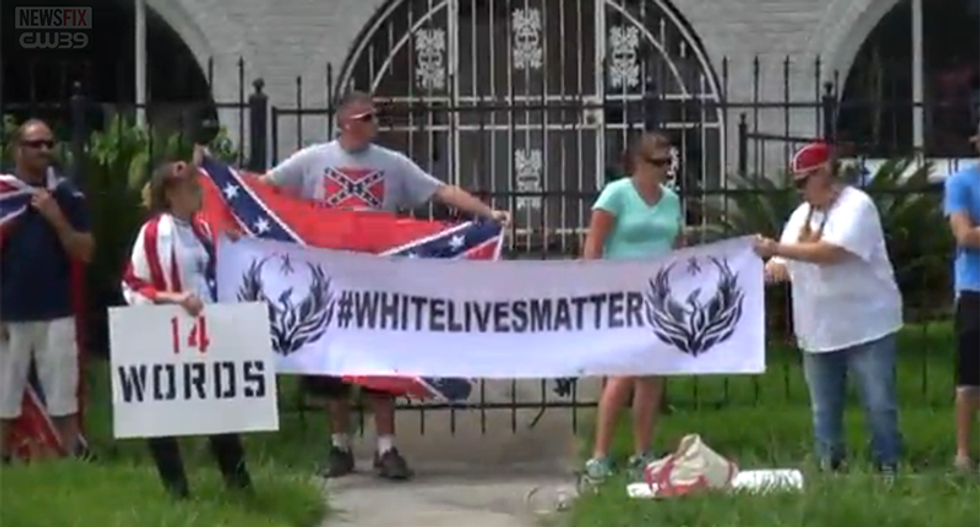 Activists with the "White Lives Matter" movement will be aligned with other white nationalist groups like the KKK or skinheads, according to the Southern Poverty Law Center's "hate map."

The map is released each year to show hotbeds of racist activity across the United States. Heidi Beirich, head of the SPLC's Intelligence Project, told VICE News this week that the "movement" is "clearly white supremacists" who should instead be operating under the slogan "only white lives matter."

According to an SPLC report from earlier this month, the Black Lives Matter movement came out of a response to the shooting of Trayvon Martin and advocates largely for accountability and equal rights by law enforcement.

The White Lives Matter movement, by contrast, goes beyond what mainstream conservatives have advocated as an "all lives matter" position. Instead, their group is lead by 40-year-old Rebecca Barnette of Tennessee. Barnette also serves as the vice president of the women’s division of the racist skinhead group Aryan Strikeforce. They promote a pro-whiteness agenda, claiming that the race is under attack from immigration, integration and other race-mixing.

Barnette's focus is to create a "new world" for whites, where they can be safe from the dangers of persecution from non-whites and non-Christians. The SPLC cites a post from Barnette on a Russian social networking site used by many white supremacists and neo-Nazis in which she claims Jews and Muslims have formed an alliance “to commit genocide of epic proportions” of the white race. Now is the time, she adds in the same post, for “the blood of our enemies [to] soak our soil to form new mortar to rebuild our landmasses.”

These groups are out in full force, recruiting and advocating for their support of whiteness. Just last week, armed white supremacists stood outside of an NAACP headquarters in protest, waving Confederate flags and "White Lives Matter" banners along with signs with slogans frequently used in the white supremacist movement.

The movement has seemingly become more mainstream with the emergence of Donald Trump's candidacy. White supremacists, anti-black and anti-Latino supporters have come out to support Trump and while he eventually denounced them, they still maintain that he is their candidate.