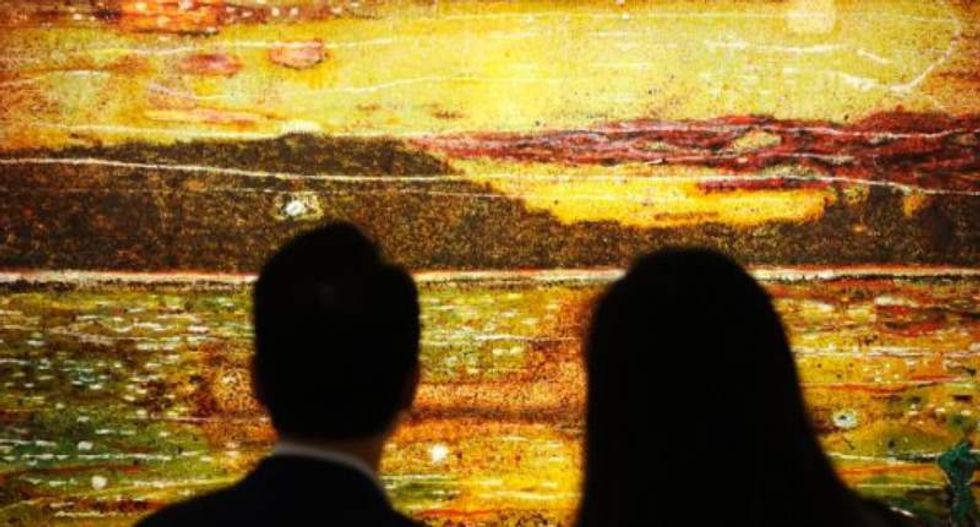 Peter Doig's 'Night Fishing' on display at Christie's auction house during a press preview in New York on May 1, 2009. (Agence France-Presse/Emmanuel Dunand)

Artist Peter Doig is famous for somewhat strange landscape paintings that fetch millions of dollars, but he has disowned one particular desert scene.

Is he telling the truth, or trying to hide from an embarrassing past? A US federal judge in Chicago will decide.

Robert Fletcher, a retired Canadian corrections officer who owns the disputed desert landscape painting, is suing Doig for refusing to acknowledge that the painting is one of his works -- which means its value is significantly diminished

Doig contends that he was nowhere near the prison where Fletcher says they met, and where he allegedly created the work. He says he has the documents to prove there is in fact a Peter Doige -- with the extra e -- who painted the scene.

The unusual case is stirring up the art world, and experts say it could set a dangerous standard that would leave artists at risk for costly settlements.

"The specifics of this case are pretty unusual," said Matthew Biro, a professor of modern and contemporary art at the University of Michigan.

"It could definitely set a precedent," he said, "If Doig loses this case, what would stop other collectors who feel they have found a multi-million-dollar painting to find backing to sue artists to agree to it?"

Biro says the case brings to light the increasingly speculative nature of the art world, in which works are bought and sold as investments.

Amy Whitaker, a professor of art business at New York University, expressed concern about the burden of proof.

"There's somehow an implication in the lawsuit itself that the artist is responsible for guaranteeing the value" of an artwork, Whitaker said.

"That is in no way shape or form the responsibility of the artist."

The facts of the case date back to the 1970s, when Fletcher says he met a man named Peter Doige, who was later imprisoned at the facility where Fletcher worked for possession of LSD.

Fletcher says he remembers being impressed by one of Doige's paintings of a desert landscape in golden hues -- an acrylic painting on linen. He bought it for $100 in the hopes of keeping Doige from going back to selling drugs.

Decades later, a friend saw the painting hanging in Fletcher's home and said it was in fact the work of Peter Doig, whose creations can command $10 million at auction.

"There can be no question that the disputed painting was painted by the hand of Peter M. Doig," Bartlow wrote in a report to the court.

Bartlow, who is a co-plaintiff in the case, said his decision was based on "several idiosyncratic forms" attributable to Doig's paintings, such as the "color and texture of the paint."

Fletcher and Bartlow tried to auction the painting, but were thwarted when Doig denied having painted it.

They asked Doig to provide proof by offering details of his whereabouts between 1976 and 1978 -- the time period when they say the sale occurred. No proof was forthcoming, they say.

So Fletcher and Bartlow sued Doig in 2013, claiming that Doig and Doige are one and the same.

Their attorneys suggested Doig's denials may be rooted in embarrassment over his imprisonment. They have claimed he has a history of lying about his past.

As proof, Fletcher's lawyers have pointed to a number of intriguing similarities between the Peter Doige that Fletcher knew and the artist Peter Doig.

They said both Doige and Doig had been in Canada in the 1970s and the artist Doig has previously admitted to LSD use.

"Three of his famous paintings, 'Windowpane,' 'Blotter,' and 'Orange Sunshine,' bear titles that are street names for varieties of LSD," attorney William Zieske wrote in a court filing.

But Doig maintains the case is a matter of mistaken identity.

He said he has never met Fletcher and that he was never jailed in Canada. His lawyers say police records back up the latter claim.

Artistically, his representatives claimed that Doig did not begin painting on canvas until 1979, "well after this work was made."

Doig's lawyers even tracked down a Peter Doige in Canada -- also a painter -- who died in 2012 and who had in fact be jailed there in the 1970s. They claim he is the Doige that Fletcher met.

The deceased man's student identification card from 1976, submitted to the court, includes a picture of him bearing a strong resemblance to the artist Doig.

Unable to find a resolution and deciding there was enough evidence from the plaintiffs, US District Court Judge Gary Feinerman accepted the case for trial, taking place in a Chicago courtroom.

He is expected to rule after hearing testimony this week.