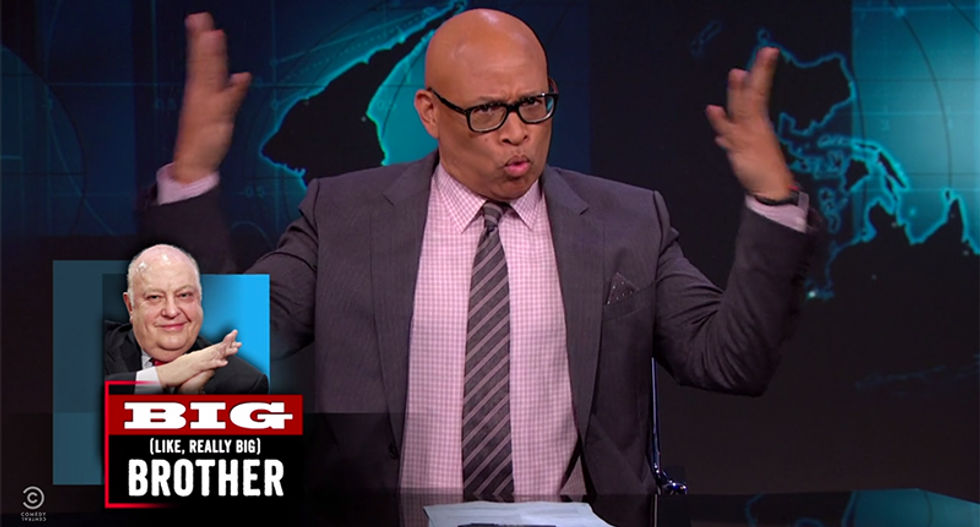 "Nightly Show" host Larry Wilmore was disgusted by the latest round of accusations and controversy surrounding Fox News and former CEO Roger Ailes.

Ailes may have resigned, but the scandals keep piling up for the network. Not one but two major stars at Fox have come out against Ailes, alleging sexual harassment.

But now it seems the "alleged nasty man" got "even nastier," Wilmore said. It was revealed this weekend that Ailes funneled millions in Murdoch money to security firms that had his alleged victims and his media critics spied on.

"He spied on his enemies? Who are Roger Ailes' enemies besides decency, direct exposure to sunlight and Han Solo?" Wilmore joked.

According to reports, the alleged spies worked from inside the Fox News headquarters in a place they referred to as "The Black Room," which Wilmore found shocking. "If it's Fox shouldn't they be calling the 'All Lives Room?'" he mocked.

"This stinks to high heaven. The guy running a news network is spying on journalists?! There is no bigger sin," Wilmore said after showing a clip of CNN's Brian Stelter, who admitted to accidently dating a Fox spy.

"What do they mean others?" Wilmore wondered, becoming paranoid at a suspiciously looking potted palm in the corner. "There's no way Roger Ailes is spying on me. Right?"

"Now we know Ailes can't afford to spy on me because of the money he's about to fork over to Gretchen Carlson," Wilmore said about the latest round of settlement talks, that will have both the network and Ailes paying out upwards of $10 million to avoid a public trial. The payout might be due to Carlson's major trump card: She may have secretly recorded Ailes sexually harassing her.

"So, these reports claim that while Ailes was secretly spying on his enemies, Carlson may have been secretly spying on Ailes?" Wilmore asked. "Well it makes sense, there's plenty of places to hid the recording device in Ailes' jowl pouch."

But it doesn't end there. There are "mounting claims about Ailes' mounting," Wilmore described, before running a clip about Andrea Tantaros, who revealed Monday that she reported claims of sexual harassment to the network. She says she was demoted and taken off the air shortly after that.

"Okay, so she reported her boss and was fired. So, to be clear, as soon as you do real reporting at Fox, you don't fit in," Wilmore joked. "Fox obviously can't admit she was let go because of the allegations, especially since it doesn't jibe with their timeline," Wilmore said. Fox has said that they didn't know about any of these allegations until Carlson went public and filed her lawsuit. If Tantaros told the network about Ailes prior to Carlson's suit then it becomes proof that they did know, and the network can be sued for allowing it to continue.

"Okay, we pick on Fox News a lot for being dishonest and fearmongering and beating up on the underdogs of America," he continued. "But don't tell me that's not justified when Fox is being dishonest and fearmongering and beating up on the underdogs in their own company. Because right now I'm not focusing on right-wing politics, or climate change denial or the fact that Bill O'Reilly thinks all black people have forehead tattoos. I'm focusing on allegations that a company allowed its boss to harass its employees, then spent money to keep it secret and then when those same victims of harassment tried to do the right thing and speak out, punished them for it. That's not fair and balanced, that's evil and f*cking disgusting."

Check out the epic slam below: