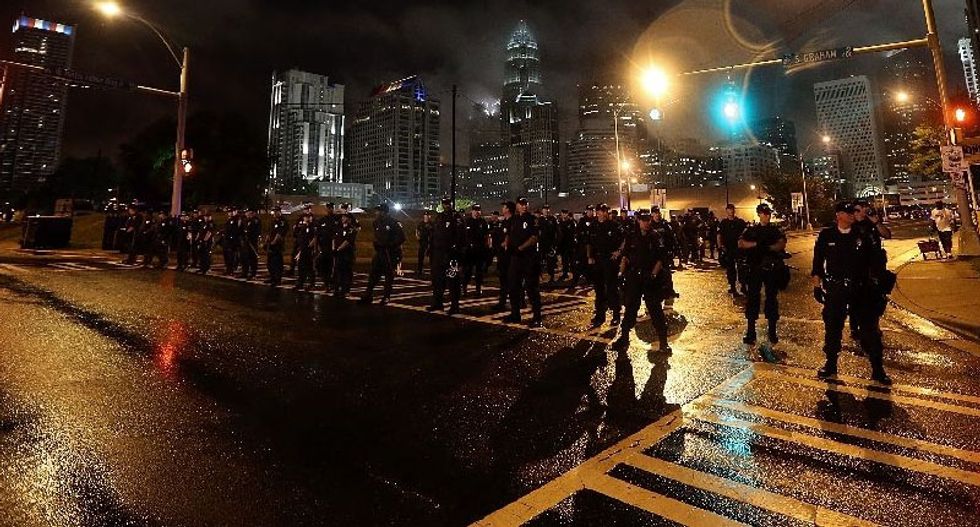 Twelve officers have been injured during continuing protests in a North Carolina city sparked by the fatal police shooting of an African-American man, officials said on Wednesday.

Demonstrators gathered late Tuesday near an apartment complex in the city of Charlotte where the shooting occurred, carrying signs that read "Black Lives Matter" and chanting "No justice, no peace!" local television reported.

Media reported that several hundred people gathered to protest after the shooting of Keith Lamont Scott, who was reported to be African-American as was the officer who killed him.

"Approximately 12 officers injured. One officer hit in face with a rock," read a tweet posted by the Charlotte-Mecklenberg Police Department.

A separate police department tweet said the officers were "injured tonight working to protect our community during demonstration."

News reports said an unspecified number of civilians have also been injured.

WSOC-TV reported that police donned riot gear and used tear gas as they tried to subdue the angry crowd, which authorities said attacked and damaged several police cars. The standoff continued, with dwindling numbers, into the early hours of Wednesday.

News reports said the officer involved in the shooting, Brentley Vinson, has been put on paid leave.

The television station said Vinson and other officers were searching for a suspect on an outstanding arrest warrant.

Police encountered Scott -- who was not the person they were seeking -- in a car parked at the building.

Officials said he had a firearm, which is not illegal under local law. A confrontation ensued and police, who said they felt threatened by Scott, opened fire and killed him. News reports gave his age as 43.

The dead man's relatives, interviewed by local media, said he was not carrying a gun but instead was holding a book in his hands when he was gunned down.

"The community deserves answers and full investigation will ensue," she wrote on Twitter.

"Will be reaching out to community leaders to work together."