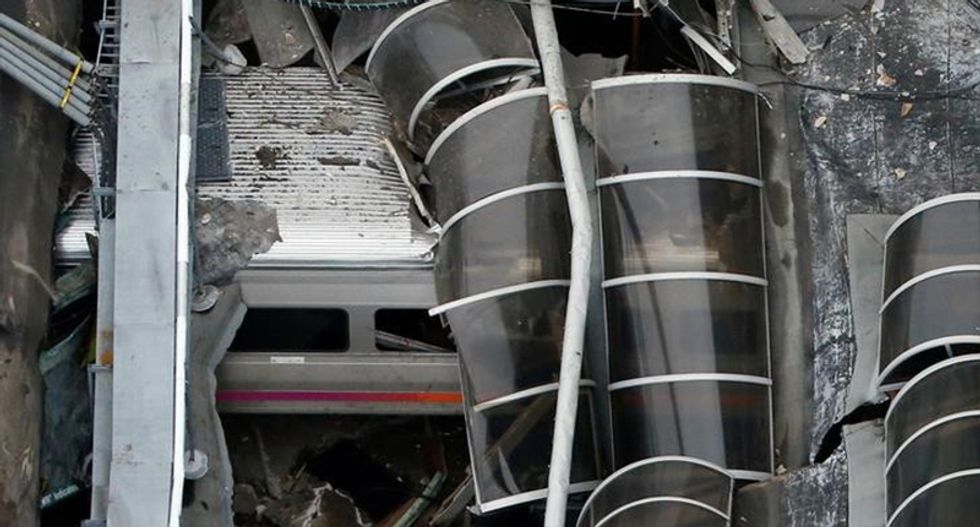 A commuter train derailed and crashed through the station in Hoboken, New Jersey, near New York, on Thursday, killing a woman on the platform and injuring more than 100 people. Here is a list of some recent noteworthy passenger train and commuter ferry crashes:

January 2005: A Metrolink commuter train hit an unoccupied vehicle near a grade crossing in the Los Angeles suburb of Glendale, derailing and then colliding with a Union Pacific freight train, which was tied down on a siding. Eleven people were killed and more than 100 injured.

September 2008: A Metrolink commuter train collided head-on with a Union Pacific Railroad freight train in Chatsworth, a suburb of Los Angeles, resulting in 25 deaths, including the commuter train's engineer. The force of the collision caused the Metrolink's locomotive to telescope into the lead passenger coach by 52 feet (19 meters). More than 100 injured people were taken to area hospitals.

June 2009: A Washington, D.C., Metro subway train struck the rear of another Metro train stopped ahead of it in the nation's capital, killing the running train's operator and eight passengers, and sending 52 people to hospitals.

January 2013: A high-speed, privately operated passenger ferry traveling from New Jersey to New York struck a pier in Manhattan, seriously injuring four people and resulting in minor injuries for 75 passengers and one deckhand.

February 2015: A Metro-North train collided with a sport utility vehicle at a railroad crossing in the New York suburb of Valhalla. The collision killed five train passengers and the SUV's driver as hundreds of feet of electrified rail skewered the train's first two carriages.

May 2015: An Amtrak passenger train derailed in Philadelphia after entering a curve at 106 miles per hour (171 km per hour), more than twice the recommended 50-mile-per-hour (80 km-per-hour) speed, killing eight passengers and sending 185 others to hospitals. The locomotive and seven passenger cars went off the rails.

April 3, 2016: An Amtrak train traveling from New York hit a backhoe performing maintenance on the tracks in Chester, Pennsylvania, a Philadelphia suburb, killing the two men working with the construction equipment and resulting in 41 people going to hospitals. A National Transportation Safety Board report determined the men had a right to drive the backhoe on the tracks at the time.