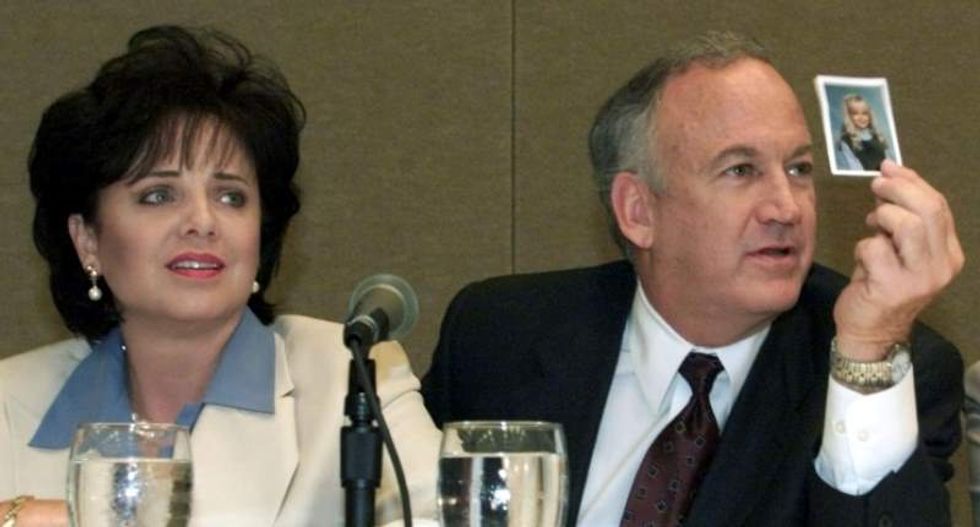 Patsy Ramsey looks down as her husband John Ramsey (R) produces a picture of their daughter Jon-Benet Ramsey during a press conference where they released the results of an independent lie detector test, in Atlanta on May 24, 2000. (Tami Chappell/File Photo)

Police investigating the slaying of Colorado child beauty queen JonBenet Ramsey declined on Thursday to address the media hype surrounding the 20th anniversary of one of the most sensational unsolved murders in the annals of American crime.

Boulder Police Chief Greg Testa said in an unusual videotaped message that his department will not participate in a flurry of television specials, documentaries and news articles slated to run between now and December.

The 6-year-old girl’s bludgeoned and strangled body was found by her father in the basement of her family’s Boulder home on December 26, 1996, a day after her parents reported the child missing and a ransom note left in the house.

Videos that surfaced of the blond, blue-eyed youngster in full makeup performing in beauty pageants helped attract international attention to the case.

Testa said the latest flurry of media accounts offer "distorted" facts and "many theories on how this crime occurred and who is responsible," adding that his homicide detectives are actively following up on leads in the hope of ultimately identifying a suspect in the girl’s murder.

“We have not and will not give up,” Tesla said. “We remain focused on this investigation and finding justice for JonBenet.”

To date Boulder police have processed more than 1,500 pieces of evidence, including some 200 DNA samples, reviewed at least 20,000 tips, letters or emails and interviewed more than 1,000 individuals.

Police critics, however, have said the failure of investigators to secure the house at the outset led to a contaminated crime scene that made it difficult to solve the case.

Early on, suspicion swirled around the girl’s parents, Patsy and John Ramsey, because of the odd circumstances surrounding the events, including a purported ransom demand for $118,000, the exact sum John Ramsey received as a work bonus that year.

In 2013, it was revealed that a grand jury impaneled to hear the case in 1999 voted to indict the girl’s parents, but then-District Attorney Alex Hunter declined to prosecute the case, citing insufficient evidence.

Patsy Ramsey died in 2006, and John Ramsey, a computer software executive, moved away from Colorado and has since remarried.

The girl’s older brother, Burke, who was aged 9 at the time and home during the killing, has granted an interview to talk-show host Dr. Phil McGraw that is slated to air later this month.