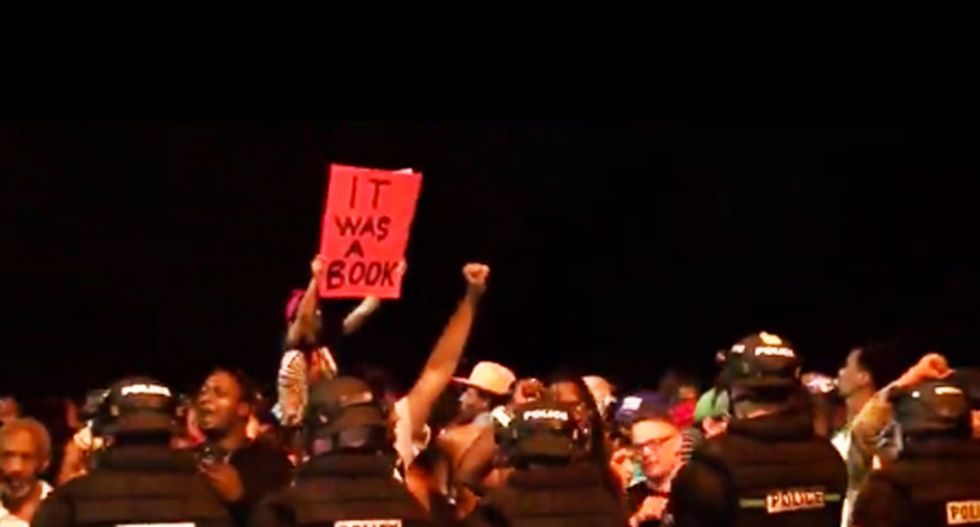 Authorities in Charlotte, North Carolina, braced on Wednesday for a possible second night of rioting triggered by the police killing of a black man who refused commands to drop a handgun that officers said he was brandishing.

Sixteen police were injured overnight on Tuesday and one person was arrested as officers in riot gear clashed with demonstrators who hurled stones, set fires and briefly blocked an interstate highway.

Police and protesters offered widely differing accounts of the shooting. Officers said Keith Scott, 43, was armed and ignoring orders, while the victim's family and a witness said he was holding a book. Authorities have not released any video of the incident, but say they plan to.

The trouble in Charlotte unfolded as demonstrators in Tulsa, Oklahoma, demanded the arrest of a police officer seen on video fatally shooting an unarmed black man who had his hands in clear view at the time.

The deaths were the latest to raise questions of racial bias in U.S. law enforcement, and they stoked a national debate on policing ahead of the presidential election in November.

Police shootings in cities including New York, Chicago and Ferguson, Missouri, have sparked more than two years of largely peaceful protests punctuated by days of rioting and arson and given rise to the Black Lives Matter civil rights movement.

U.S. Democratic presidential nominee Hillary Clinton said such killings were unbearable. Her Republican rival, Donald Trump, questioned what the Tulsa officer was thinking in shooting a man he said seemed to pose no imminent threat.

Criminal investigations have been opened in both cities, and the U.S. Justice Department has started a separate probe into the Oklahoma incident to see if officers' use of force amounted to a civil rights violation.

Charlotte's police chief, Kerr Putney, said Scott was seen on Tuesday afternoon getting into a vehicle holding a handgun. Police surrounded the car, Putney said, and Scott was shot by a black police officer after he exited the car and did not obey orders to drop his weapon.

"I can also tell you we did not find a book," Putney told a news conference. "We did find a weapon."

Local resident Taheshia Williams said she saw the incident from her balcony about 100 feet (30 meters) away, and that she watched Scott get out of his car with his hands raised.

"Hands up. No gun. When he got out of the car, a book fell off his lap," Williams told reporters on Wednesday. She said she heard Scott ask police what he had done wrong, could not hear their reply, but then heard four shots.

"It's a cover-up. They made a mistake and they're doing their best to make sure they cover up that mistake," she said.

Black activists and pastors called for an economic boycott of the city, and a several dozen students held a "lay-in" protest at the University of North Carolina at Charlotte. The American Civil Liberties Union of North Carolina urged the body and dash camera footage be released.

Police said Officer Brentley Vinson was in plainclothes when he shot Scott and was not wearing a body camera.

Charlotte Mayor Jennifer Roberts told CNN she had not seen any video from the scene, but that Putney told her footage was recorded by cameras worn by other police officers and mounted on patrol cars.

"The chief is very open to showing that video ... not just to elected officials, but also to community leaders," she said. "We have done that in the past. We plan to do that this time."

In 2013 a white police officer killed Jonathan Ferrell, an unarmed black man, in Charlotte. Ferrell's family received $2.25 million from the city in compensation.

North Carolina allows for the open carry of handguns, including having a pistol in a vehicle.

A friend of Vinson, Michael Scurlock, told CNN on Wednesday that the officer on Tuesday night.

"I know he's torn," Scurlock said. "No matter if it's justified or unjustified, it's tough when you have to know that you had to take someone else's life."

Protesters in Oklahoma, meanwhile, want Tulsa Police Officer Betty Shelby, who is white, to be arrested for the killing on Friday of Terence Crutcher, 40, whose sport utility vehicle had broken down and was blocking a road.

Shelby's lawyer has said she feared for her life, believing Crutcher was reaching into his vehicle for a weapon. Lawyers for the Crutcher family released still images from police videos showing the car window was shut and said the use of force was not justified.

Two police videos, one taken from a helicopter and one from a patrol car dashcam, show Shelby following Crutcher as he walked slowly to his vehicle with his hands up. Shelby shoots him as he puts his hands on the car, and he falls to the ground.

Speaking in New York City alongside relatives of Crutcher, civil rights activist Rev. Al Sharpton urged both presidential candidates to broach the topic of police shootings on Monday at their first head-to-head debate.

"Any debate that does not discuss this issue is a bogus debate," Sharpton told a news conference. "This is a national crisis and it must be addressed."

This Tuesday, the Biden administration recommended a "pause" in using the single-dose Johnson & Johnson COVID-19 vaccine after reports of extremely rare blood clots in six people out of approximately 6.8 million doses that have been administered.

Former President Donald Trump took the opportunity to jump on the news, releasing a statement saying the Biden administration "did a terrible disservice to people throughout the world" in calling for the pause, adding that doing so would cause the "reputation" of the vaccine to be "permanently damaged."