Charlotte police chief: Shooting video to be released 'when there is a compelling reason' 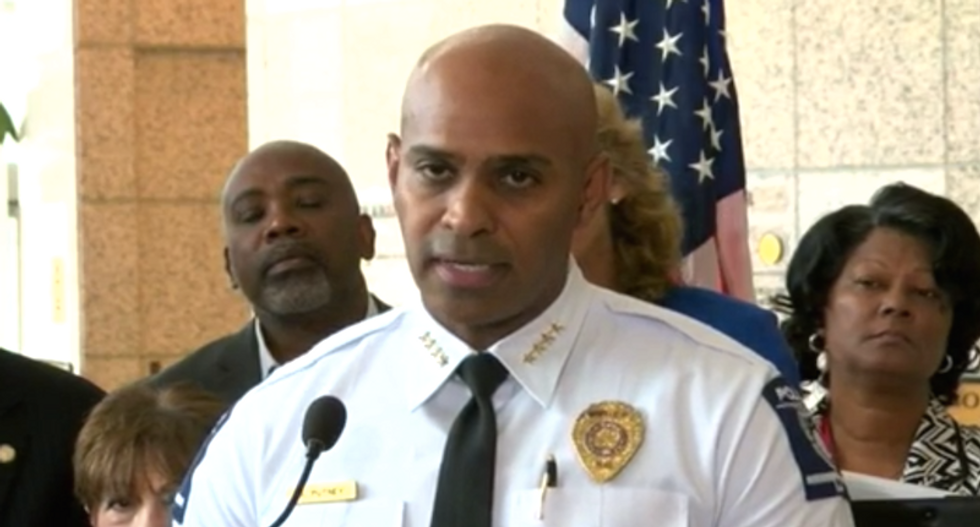 Police in Charlotte do not plan for now to release a video showing the fatal shooting of a black man by officers that has sparked two nights of violent protests in North Carolina's largest city, the department's chief said on Thursday.

The video will only be shown to the family of Keith Scott, 43, who was shot dead by a black police officer in the parking lot of an apartment complex on Tuesday afternoon, Charlotte-Mecklenburg Police Chief Kerr Putney said.

North Carolina Governor Pat McCrory declared a state of emergency during Wednesday night's rioting, which saw one man critically wounded by a gunshot. At least eight more civilians and four police officer were injured and 44 people arrested for charges ranging from assault to failure to disperse.

Many of the protesters dispute the official account of Scott's death. Police contend he was carrying a gun when he approached officers and ignored repeated orders to drop it. His family and a witness say he was holding a book, not a firearm, when he was killed.

"I'm not going to release the video right now," Putney told reporters, the morning after nine people were injured and 44 arrested in riots over Scott's killing.

He said the video supports the police account of what happened, but does not definitively show Scott pointing a gun at officers.

Charlotte's reluctance to release the video stands in contrast to Oklahoma, where officials on Monday released footage of the fatal shooting of Terence Crutcher by police after his vehicle broke down on a highway. That shooting is now the subject of a U.S. Department of Justice probe.

The killings were the latest in a long series of controversial fatal police shootings of black men across the United States, sparking more than two years of protests asserting racial bias and excessive force by police and giving rise to the Black Lives Matter movement.

Scott's killing was the 214th of a black person by U.S. police this year out of an overall total of 821, according to Mapping Police Violence, an anti-police violence group created out of the protest movement. There is no national-level government data on police shootings.

Looters were seen smashing windows and grabbing items from a convenience store as well as a shop that sells athletic wear for the National Basketball Association's Charlotte Hornets. Protesters also set fire to trash cans.

Hundreds of additional state police officers and National Guard troops would be deployed to Charlotte's streets on Thursday to prevent a repeat of the violence, Putney said. But officials said they had no plans to impose a curfew.

"It should be business as usual," Putney said. "We don't see the need to definitively shut the city down at a specific hour."

However, large Charlotte employers including Bank of America Corp and Wells Fargo & Co told employees not to go to uptown offices on Thursday but work from home.

"We're here to seek the truth, so we're investigating that to find the truth, the absolute truth as best as the evidence can show us," Putney said.

The American Civil Liberties Union has called on the police in Charlotte to release camera footage of the incident. Authorities have said the officer who shot Scott, Brentley Vinson, was in plainclothes and not wearing a body camera. But according to officials, video was recorded by other officers and by cameras mounted on patrol cars.

Todd Walther, the Charlotte Fraternal Order of Police official, said the plainclothes officers were wearing vests marked "police" and that he saw them do nothing wrong. Releasing the video would satisfy some people, but not everyone, he added.

"The clear facts will come out and the truth will come out. It's unfortunate to say that we have to be patient, but that's the way it's going to have to be," Walter said.