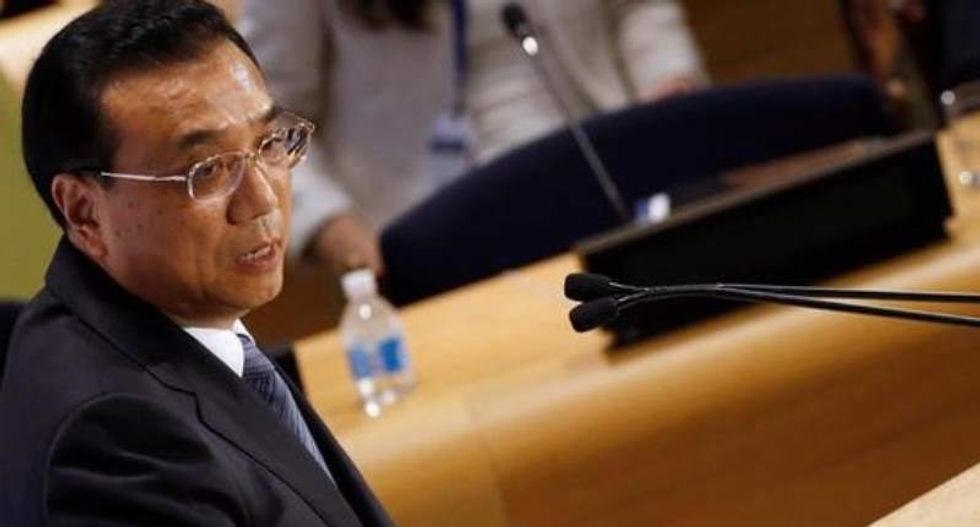 Chinese Premier Li Keqiang speaks during a High Level Leaders meeting on Refugees on the sidelines of the United Nations General Assembly at United Nations headquarters in New York, on Sept. 20, 2016. (Reuters/Brendan McDermid)

Li declined to comment on which candidate he favored.

Republican Donald Trump has threatened to slap tariffs on Chinese goods and push for tougher trade talks if elected. His Democratic rival, Hillary Clinton, has changed tack on trade, backing away from a Pacific trade pact she previously endorsed.

Both candidates have been critical of China's assertive pursuit of territory in the South China Sea, a potential flashpoint in Asia and a cause of significant friction in relations between Washington and Beijing.

Li, who was attending the U.N. General Assembly in New York, said the U.S. election was an internal affair for the United States, so what he could say was very limited, but he went on to remark:

"No matter who gets elected in the U.S. presidential election, I believe that China-U.S. ties will continue to grow steadily and in a positive direction."

Li responded to complaints from foreign business leaders about restricted access to the Chinese market by saying that China was open to foreign investment, although some economic sectors were not yet mature.

"This process of them becoming more mature is also a process for them to open up and the areas of the Chinese economy open to foreign investment will only increase and China will only open its door even wider. The door will not close," he said.

Referring to a U.S.-China Bilateral Investment Treaty that has been long in negotiation given disagreements about access to sectors the sides deem sensitive, Li said as long as both countries took a strong and pragmatic approach, they would be able to reach a mutually beneficial agreement.

As an example of China's willingness to open up its markets, Li said China had decided to designate a Chinese investment bank as a clearing bank for renminbi business in New York and welcomed foreign banks in the city which met eligibility requirements to become clearing banks for the currency.

He also said China would soon allow imports of beef on the bone from the United States, now that Chinese quarantine procedures had been completed.

Li pledged that China would not engineer a devaluation of its currency to boost exports for its economy, which is growing at its slowest rate in two decades. Some critics in Washington have charged that Beijing is still manipulating its currency, although the U.S. Treasury says its assessment is that it is not undervalued.

"I can say here that in the third quarter of this year, or until the end of this year, China's economy will maintain this momentum of steady growth."

China's growth target for this year is 6.5 to 7 percent. In the second quarter of this year, the world's second-largest economy grew 6.7 percent from a year ago, according to official data.