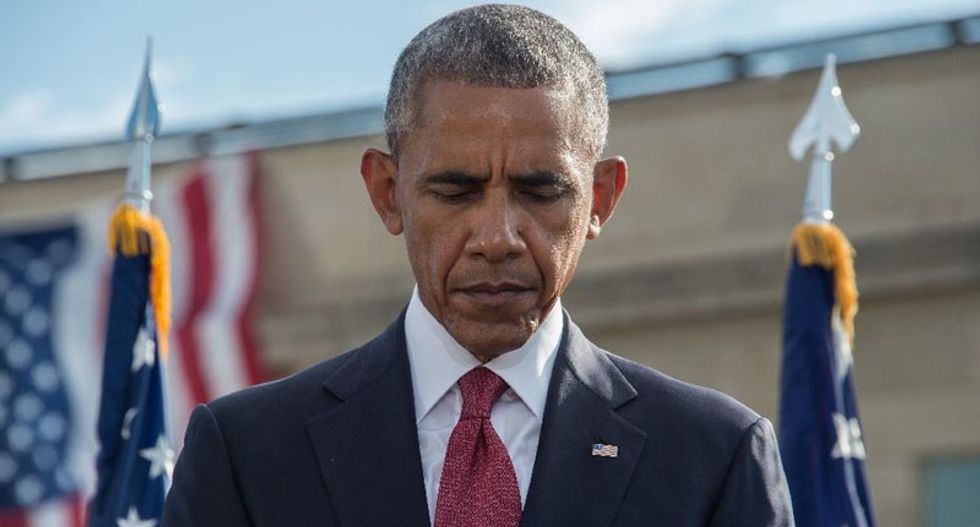 US President Barack Obama attends a ceremony at the Pentagon in Washington, DC, on September 11, 2016 commemorating the September 11, 2001 attacks (AFP Photo/Nicholas Kamm)

Congress on Wednesday overwhelmingly rejected President Barack Obama's veto of legislation allowing relatives of the victims of the Sept. 11 attacks to sue Saudi Arabia, the first veto override of his presidency, just four months before it ends.

The House of Representatives voted 348-77 against the veto, hours after the Senate rejected it 97-1, meaning the "Justice Against Sponsors of Terrorism Act" will become law.

The vote was a blow to Obama and to Saudi Arabia, one of the United States' longest-standing allies in the Arab world.

Obama's 11 previous vetoes were all sustained. But this time almost all of his strongest supporters in Congress opposed him in one of their last actions before leaving Washington to campaign for the Nov. 8 election.

"Overriding a presidential veto is something we don’t take lightly, but it was important in this case that the families of the victims of 9/11 be allowed to pursue justice, even if that pursuit causes some diplomatic discomforts," Senator Charles Schumer, the third-ranking Democrat in the Senate, said in a statement.

Schumer represents New York, the site of the World Trade Center and home to many of the nearly 3,000 people killed in the 2001 attacks, attack survivors and families of victims.

He led the fight for the legislation in the Senate, with Senator John Cornyn, the No. 2 Senate Republican. Kirsten Gillibrand, New York's other senator and also a Democrat, cast the 67th "no" vote, the number needed to override the veto in the Senate.

The law, known as JASTA, passed the House and Senate without objections earlier this year.

Some victims' families had been pushing for the legislation for the 15 years since the attacks. They wanted a law granting an exception to the legal principle of sovereign immunity barring them from seeking damages from the Saudi government.

Riyadh denies long-standing suspicions that it backed the hijackers of the four jetliners that attacked the United States in 2001. Fifteen of the 19 were Saudi nationals.

"We rejoice in this triumph and look forward to our day in court and a time when we may finally get more answers regarding who was truly behind the attacks," Terry Strada, whose husband died in the attacks, said in a statement.

Obama argued that the bill could expose U.S. companies, troops and officials to lawsuits, and alienate important allies. He called Senate Minority Leader Harry Reid and wrote a personal letter to him explaining that he strongly believed enacting JASTA into law would be detrimental to U.S. interests. Reid became the only senator to side with Obama.

Some bill opponents noted that the Sept. 11 families have already been awarded more than $7 billion in damages, but backers said the issue was allowing lawsuits to punish any government backing terrorism on U.S. soil.

"This bill was carefully negotiated over more than six years," Representative Jerrold Nadler, another Democrat of New York, told the House.

White House spokesman Josh Earnest told reporters that the Senate's vote was the "single most embarrassing thing" it had done in decades.

The issue, however, may not be finished. At least 28 senators signed a letter to Cornyn and Schumer asking that the two work with them to mitigate any potential unintended consequences of JASTA for national security and foreign policy.

The Saudi government financed an extensive lobbying campaign against the legislation.

Major U.S. corporations including General Electric Co and Dow Chemical Co also opposed it, as did the European Union and other U.S. allies.

Those who voted to sustain the veto in the House included Representative Mac Thornberry, the Republican chairman of the powerful Armed Services Committee, and Adam Smith, the panel's ranking Democrat, who expressed concern about implications for U.S. forces overseas.

(Additional reporting by Richard Cowan and Jonathan Landay in Washington, and Roberta Rampton aboard Air Force One; Editing by Marguerita Choy and Leslie Adler)