Cop caught on video berating black man in wheelchair: 'I'm going to give you a f*cking ticket' 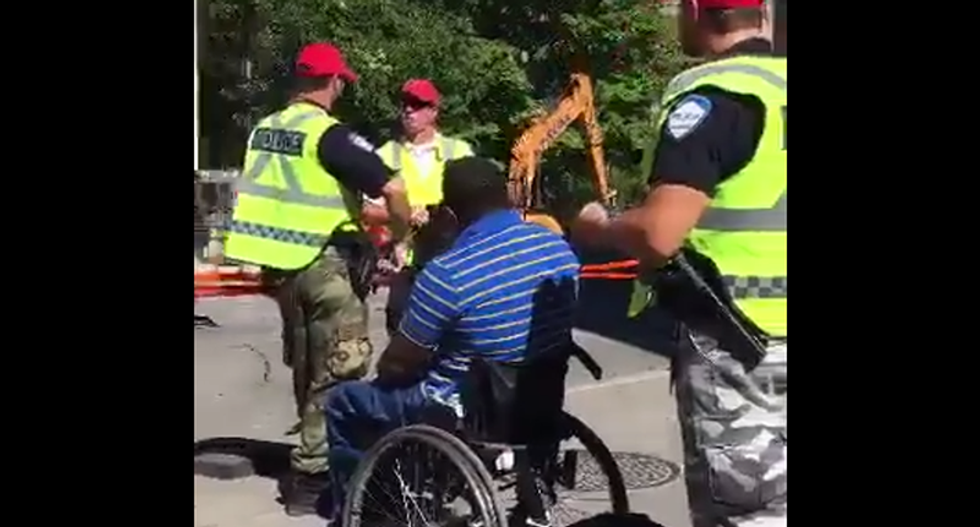 One Montreal community member filmed a disturbing incident between a police officer and a man in a wheelchair. The woman was on a coffee break when she pulled out her smartphone to capture a cop berating the young man. The video has now gone viral, with over 500,000 views on Facebook.

In it, a police officer is seen swearing at Leon Shand while he sat in his wheelchair. "I'm going to give you a f*cking ticket. You asked for it," the officer is heard saying, CBCNews reports.

The cop also searched Shand's bag and ultimately cited him with $800 in citations.

Witnesses found the incident disturbing, one filed a complaint with the police ethics commission, while others filmed the incident from different angles showing what happened.

"It makes me feel so sick to see how they treat my brother," Shand's sister Patricia Henry said. "Maybe if he wasn't in a wheelchair, who's to tell you what they would have done to him?"

The incident disgusted her but she was grateful community members were available to capture it. "It's very good to let the public see how police treat people," she said. "We are all living here and we are human beings. We are citizens."

She continued saying that her brother was upset and overcome up after the confrontation by the officer. Later on, he even fell out of his wheelchair and had to be taken to the hospital and treated for a concussion.

"He's resting, recovering from the trauma that he went through," Henry said.

Montreal police Commander Danik Guerrero verified the incident and said that he spoke with the officer involved.

He also hopes people can put the video in context. He explained the intersection Shand was moving through was a heavily trafficked intersection with many pedestrians and construction. The officer was concerned for his safety and ordered him to stay on the median when the light turned red, but he claimed Shand moved forward.

Check out the full video of the altercation below via community member Kate Marie: