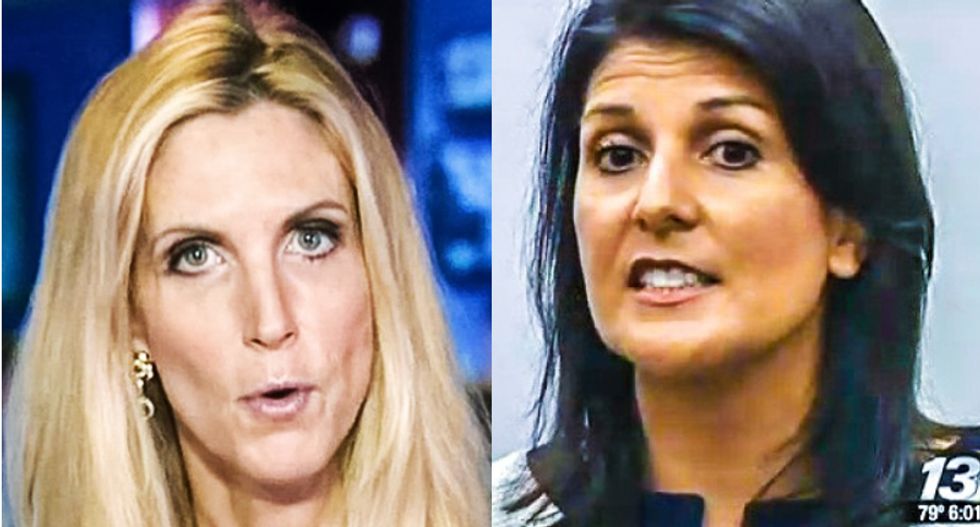 In a week when GOP presidential nominee Donald Trump and his son have gone out of their way to bash immigrants, Ann Coulter joined the attack immigrants pile-on by going after "second-generation immigrant" South Carolina Gov. Nikki Haley (R) for removing the Confederate flag from the state capitol.

Appearing on like-minded Trump booster Sean Hannity's radio show, the conservative gadfly who has found a second act to her career during the Trump campaign lauded Trump for "going after political correctness."

In an interview recorded by Media Matters, Coulter laid out her case.

"You not only have the little Nazi block watchers, but it's that it's infected our entire dialogue so that it is the official position of the Democratic Party that America is better the more Americans we replace with foreigners," she continued.

Coulter then turned on "second-generation immigrant" Haley for betraying Americans in in her state.

"I mean look even at Republicans like NIkki Haley, rushing in to take down confederate soldiers, to take down the -- that's not only part of our history, but wow, talk to Pat Caddell about the history of the civil war and the confederates, "she said. "For -- for, again, second generation immigrant Nikki Haley to come in and -- a Republican, and strip Americans of their history, and their heritage, this is the political correctness that Trump is going against, so much more than forcing reporters to -- to let him say anchor babies."

Listen below via Media Matters: