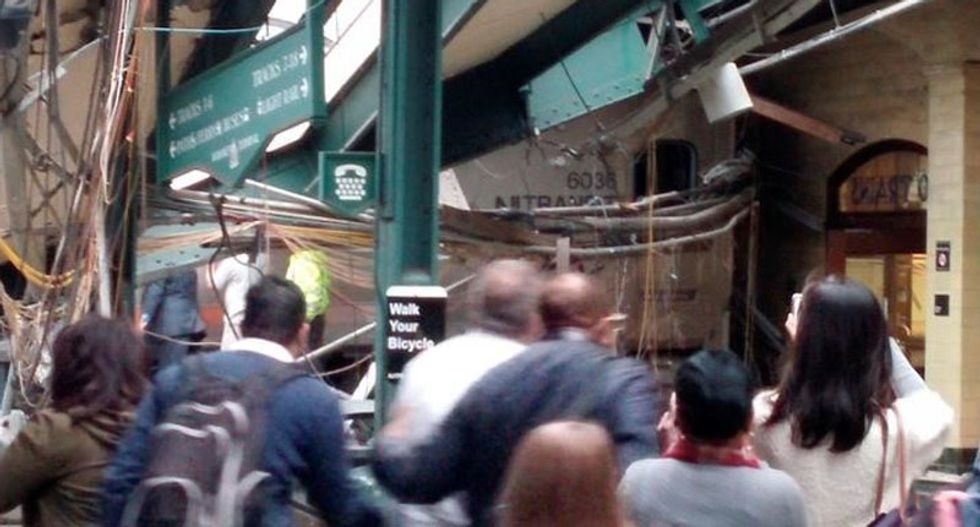 At least one person was killed and scores injured, some critically, when a commuter train plowed into Hoboken station in New Jersey during the morning rush hour on Thursday, officials said.

New Jersey Governor Chris Christie told CNN one person was killed in the crash at one of the New York City area's busiest transit hubs. He said there were no indications it was anything other than an accident. MSNBC had initially reported three fatalities, citing medical officials, but later revised that to one death.

Dramatic images posted by commuters on social media showed the front of the train had smashed right through the station concourse at high speed, bringing down part of the roof, scattering debris and wreckage.

The injured were carried on stretchers to waiting ambulances while a couple of hundred emergency workers shuttled in and out of the station. Dozens of police boats bobbed in the Hudson River alongside the terminal.

Accounts from officials at two hospitals said about 75 people were injured. A spokeswoman for train operator New Jersey Transit had earlier said more than 100 people were hurt, many of them critically.

Some passengers were initially trapped in the wreckage, witnesses and officials said, but they were later freed.

There was no word yet on what caused the crash. Federal investigators were on the scene.

"The one thing we do know is that obviously this train that was traveling at a fairly high rate of speed," Christie said.

Hoboken, the last stop on the line, lies on the Hudson's west bank across from New York City. Its station is used by many commuters traveling into Manhattan from New Jersey and further afield.

Linda Albelli, 62, said she was sitting in one of the rear cars when the train approached the station. She said she knew something was wrong a moment before the impact.

"I thought to myself, 'Oh my god, he's not slowing up, and this is where we're usually stop,'" Albelli said. "'We're going too fast,' and with that there was this tremendous crash."

Passengers helped each other off the train and onto the platform. The injured sat on benches in the station while they waited for first responders, said Albelli, who lives in Closter, New Jersey.

"There were a lot of people who were really hurt," she said.

New Jersey Transit employee Michael Larson talked to reporters outside the station looking shocked and with blood from one of the injured passengers on the knee of his pants.

"It's hard to believe. I have no idea what caused it," Larson said. "The whole roof was caved in."

A major transit hub, the historic green-roofed Hoboken Station is served by NJ Transit commuter trains connecting much of New Jersey with the country's largest city, as well as the Port Authority Trans-Hudson subway-like system commonly known as PATH, a light rail service and ferry service to New York.

Train #1614 was on the Pascack Valley line, which goes through Northern Bergen County, and had originated at Spring Valley, New York, according to media reports. It was on track five when it hit the Hoboken terminal building at about 08:45 a.m. EDT.

Mike Scelzl, who was sitting in the train's first car, said he had not been paying attention when the crash happened. "When we pulled in, there was screaming. Not screams of hurt but screams of shock," he said.

In May 2011, a Port Authority of New York and New Jersey train crashed at the same Hoboken station, injuring more than 30 people when it plowed into a bumping post at the end of the track. An investigation by the NTSB determined excessive speed was the main cause of the accident.

A National Transportation Safety Board official said the agency will be looking at similarities between that accident and Thursday's crash.

The Hoboken crash is the latest in a string of fatal passenger train crashes in the United States that have included other accidents in California, New York and Philadelphia.

In September, a Metrolink commuter train carrying nearly 200 passengers crashed into a truck in Los Angeles. In May 2015, an Amtrak passenger train crashed in Philadelphia, killing eight people and injuring more than 200.

In February 2015, a New York commuter train crashed into a vehicle and killed six.

Advocates of positive train control - a system that is designed to kick in and halt a train if the engineer misses a stop signal - cite it for helping to combat human error, but there have been delays in implementing it more widely.