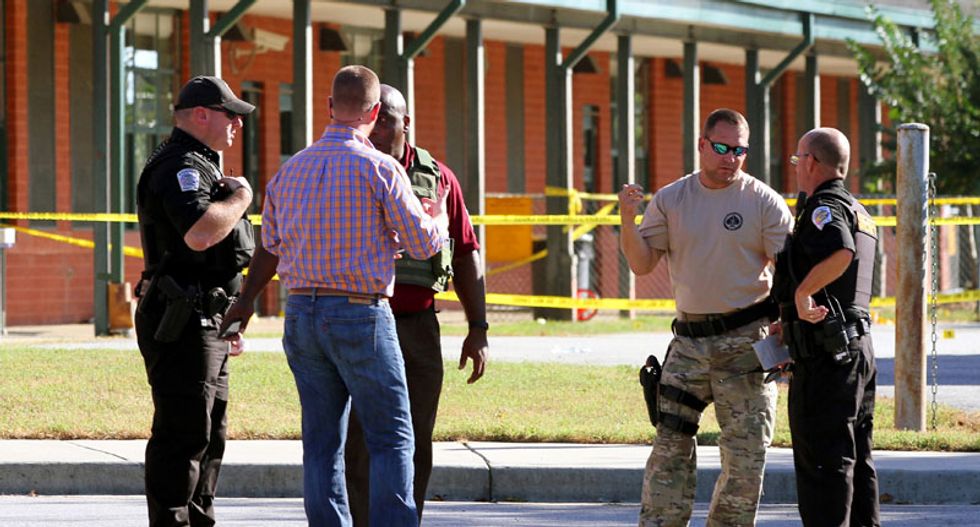 The family of a 14-year-old South Carolina boy accused of killing his father and wounding two elementary school students and a teacher lamented his actions on Thursday but gave no clues about a motive for the shooting spree a day earlier.

The teenager, who was in custody and whose name has not been released, fatally shot his father, Jeffrey DeWitt Osborne, 47, on Wednesday afternoon in rural Townville, about 100 miles (160 km) northeast of Atlanta, police said.

He then drove to Townville Elementary School, where he shot two boys and first-grade teacher Meghan Hollingsworth with a handgun before being subdued by a volunteer firefighter, police said.

"Our entire family is absolutely shocked and saddened by the senseless actions of our son and grandson," the Osborne family said in a statement provided to The Greenville News.

"We are praying and will continue to do so for the two precious children who were wounded, and for their courageous teacher who was wounded while rescuing the children," the family said.

Authorities said they did not know of any connection between the shooter and the school victims but had ruled out terrorism and ethnicity as motivating factors.

The incident at the school, which has about 280 students, was the latest in a series of shootings at U.S. schools that has fueled debate about access to guns in America. Many schools have beefed up security precautions since 2012, when a gunman shot and killed 20 children and six educators at Sandy Hook Elementary School in Newtown, Connecticut.

"This should not have happened in Townville," the school said in a statement on its Facebook page on Thursday. "It should not happen anywhere."

The suspect, who was home-schooled, was emotional when he called his grandparents Wednesday afternoon, authorities said.

His grandmother "could not make out what he was saying because he was crying and upset, and so they went to the house, and that’s when she discovered her son and called 911," coroner Greg Shore told the news conference.

The teenager was gone. Police said the boy had driven a pickup truck about 2 miles (3.2 km) to the school and crashed into a fence around the playground before shooting the other three victims, police said.

The other boy, also 6, according to media reports, was shot in the foot and the teacher was hit in the shoulder, authorities said. Both were treated and released, said Ross Norton, a spokesman for AnMed Health Medical Center.

The elementary school will be closed on Thursday and Friday as authorities investigate.

Jamie Brock, a 30-year veteran of the Townville Volunteer Fire Department who was the first responder to the scene, was hailed on social media as a hero and credited with preventing another school massacre.

He pinned down the teenager after he began shooting, allowing staff to lead children to safety, said Taylor Jones, the emergency services director for Anderson County.

Brock has declined interviews, saying through the Anderson County Sheriff's Office that he wanted to keep the focus on the victims.