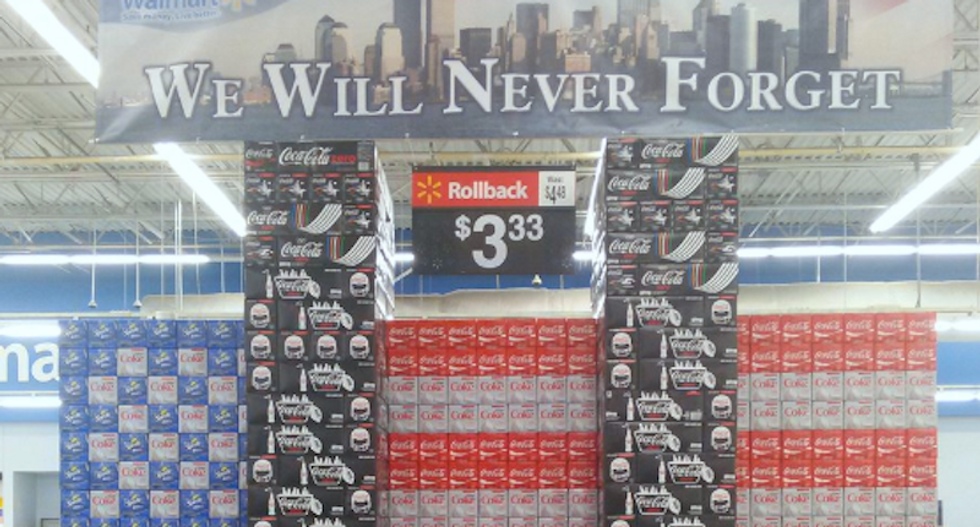 A pair of stores -- one in Texas and another in Florida -- have outraged customers with tasteless references to 9/11 in advertisements.

The Sept. 11, 2001, terrorist attacks have been referenced in ads before, some more touchingly than others, but this latest pair more closely resembles the crass "twin chowers" Subway parody cooked up three years ago by The Onion.

A Walmart store in Panama City, Florida, set up a display using boxes of black Coke Zero stacked into two tall columns resembling the doomed World Trade Center, while other Coca-Cola boxes form an American flag behind them, reported WKMG-TV.

Above the display is a custom-printed banner, featuring Walmart and Coca-Cola logos, reading: "9/11/01: We will never forget."

The retailer initially approved the display, but it has since been removed after customers complained.

A San Antonio store Miracle Mattress aired a tacky "Twin Tower sale" TV ad just once -- but the backlash was swift and severe.

“Right now, you can get any size mattress for a twin price,” a woman says in the ad, which ends with two men knocking her over and then each tearing down a tower of mattresses as she looks on in horror.

"Oh no, oh no," the woman screams, before turning toward the camera. "Never forget."

A viewer recorded cell phone video of the TV ad and posted it on the Facebook page for KSAT-TV.

The store posted an apology Thursday on its own Facebook page and was flooded with angry customer reactions.

"You're sorry you offended me?" said one customer. "That's not an apology I accept. Apologizing for creating it in the first place would be a start. Admitting you were WRONG for creating it is another step. There will never be an appropriate time to mock 9/11, and to do it to promote mattress sales?! Are you kidding me? Have some self respect."

The store claimed to be "full of military" and that some employees had lost loved ones on 9/11 -- but customers weren't buying it.

"I find it hard to believe you knew anyone or any of your employees knew anyone who lost their lives in 9/11," another person wrote. "If that were the case they would have been so disgusted with your commercial that it would have never seen the light of day!"

"We wish you therapy for your mental health issues to think this was even funny in the first place," wrote another customer. "You guys are really repulsive."