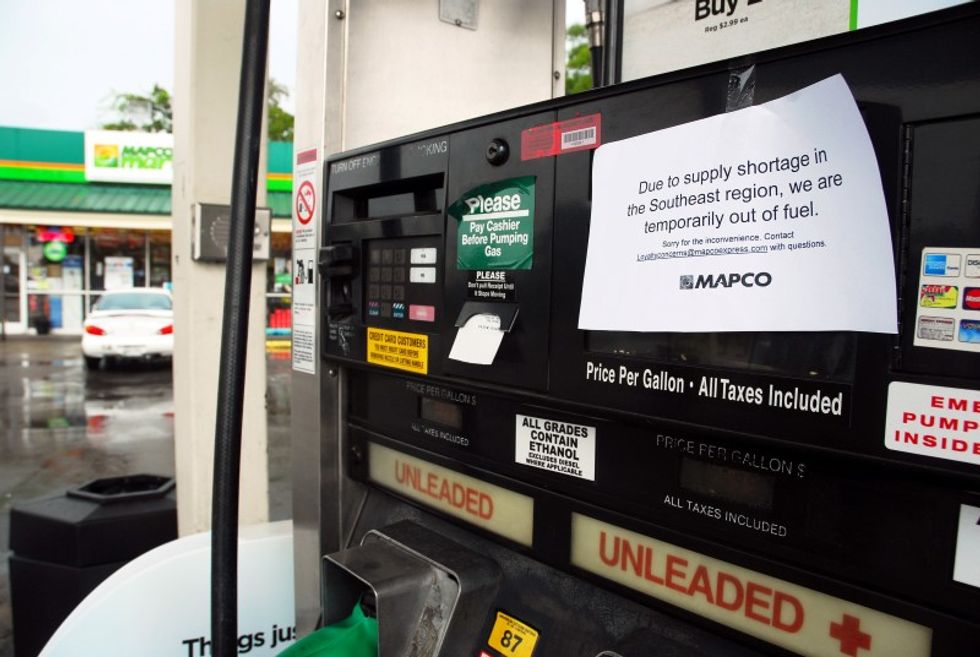 Out of fuel signs are pictured on gas pumps at a Mapco gas station at Spence Lane and Lebanon Pike in Nashville, Tennessee, U.S. September 17, 2016. REUTERS/David Mudd

Retail gasoline prices surged due to continuing problems with Colonial Pipeline Co's gasoline line that carries fuel to the U.S. East Coast, as the company started to construct a bypass line around the leak.

Colonial said on Saturday evening that it would construct a bypass that circumvents the leak, which occurred more than a week ago in Shelby County, Alabama. It is unclear when construction will be completed but the company has previously said it anticipates reopening the line, which can carry up to 1.2 million barrels of gasoline a day, later this week.

Local media reports have shown gasoline lines forming across the U.S. Southeast due to the shutdown and analysts believe that retail prices could be affected for more than two weeks. New York gasoline futures are up 9 percent in the past week, and rose 0.68 percent to $1.4715 a gallon after the market opened for trading at 6 p.m. EDT on Sunday (0000 GMT Monday).

Colonial shut its main gasoline and distillate lines that run from the Gulf Coast to the East Coast on Sept. 9 after the leak was discovered. The damaged Line 1 can carry 1.2 million barrels of gasoline per day and runs from Houston to Greensboro, North Carolina.

Several states in the Southeast have issued emergency orders waiving certain rules that restrict transport of fuel by road in order to keep filling stations stocked with fuel. It is unclear how quickly the pipeline will be fixed.

He said prices are moving up roughly one-tenth of 1 cent every hour and that it could take several weeks before prices return to normal.

A Colonial spokeswoman had no immediate response to DeHaan's assertion.

However, James Williams of WTRG in London, Arkansas, said the projected timeline for restart is possible, even with testing required by federal authorities. He also said consumers' tendencies to top off their tanks when this type of news hits is not necessarily cause for alarm, either.

"The shortage appears greater because people are filling up more often so you are certain there is a shortage because there are lines at the station but on average they are only purchasing the quarter of a tank of gas instead of three-quarters," he said.

DeHaan said prices at non-branded chains were rising more quickly than those with larger, branded operations, because larger regional gasoline companies have the ability to tap supply more quickly.

Coming into this week, U.S. East Coast inventories of total motor gasoline, which includes blending components, was higher seasonally than in the past 10 years, according to the U.S. Energy Department.