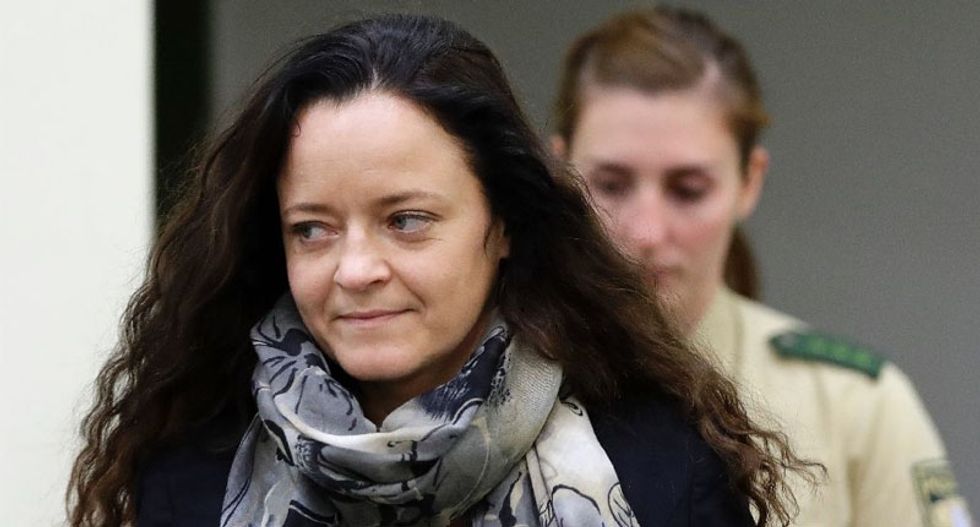 Beate Zschaepe, the surviving member of a neo-Nazi trio accused of a string of racist killings, arrives at the court room in Munich, southern Germany, on September 29, 2016 (AFP Photo/Matthias Schrader)

The surviving member of a German neo-Nazi trio accused of a string of racist killings broke her silence in court for the first time Thursday, claiming she no longer held far-right views.

More than three years into her trial, Beate Zschaepe condemned the murders carried out by the other two members of the self-styled National Socialist Underground (NSU), Uwe Mundlos and Uwe Boehnhardt.

Nervously reading out a short statement in a soft voice, the 41-year-old admitted that as a youth in the former communist east Germany after the fall of the Berlin Wall, she "indeed identified with nationalist ideology".

But she insisted that "today I judge people not by their origin and political affiliation but by their behaviour" and told the court, "I regret my own misconduct".

Zschaepe for years lived in hiding with Mundlos and Boehnhardt, who shot dead eight men with Turkish roots, a Greek migrant and a German policewoman between 2000 and 2007, before the two died in an apparent murder-suicide in 2011.

After the men's deaths, Germany was shocked to discover that the killings -- long blamed by police and media on migrant crime gangs and dubbed the "doner (kebab) murders" -- were in fact committed by a far-right cell with xenophobic motives.

Prosecutors charge that Zschaepe was an NSU member and aided the crimes, also including two bomb attacks and 15 bank robberies, by covering the men's tracks, handling finances and providing a safe retreat in their shared home.

Zschaepe told the Munich court Thursday: "I condemn what Uwe Mundlos and Uwe Boehnhardt did to the victims."

In December last year, Zschaepe had for the first time addressed the court through a 53-page statement read out by her lawyers, in which she described herself as a passive and innocent bystander to the bloody crimes.

At the time Zschaepe, who faces a maximum sentence of life in prison, insisted she was involved "neither in the planning nor the execution" of any crimes, and that she was "horrified" to learn about them afterwards.

In her 2015 deposition, Zschaepe also insisted she had stayed with Mundlos and Boehnhardt because she feared going to jail and because she was financially and emotionally dependent on them.

She has admitted only to an arson charge, having torched their home after the men died, and of then distributing a DVD in which the group boasted about the killings in a video set to a comical Pink Panther theme.

The random discovery of the NSU in 2011 deeply embarrassed German authorities, exposing police and domestic intelligence flaws and raising uncomfortable questions about how the cell went undetected for 13 years.