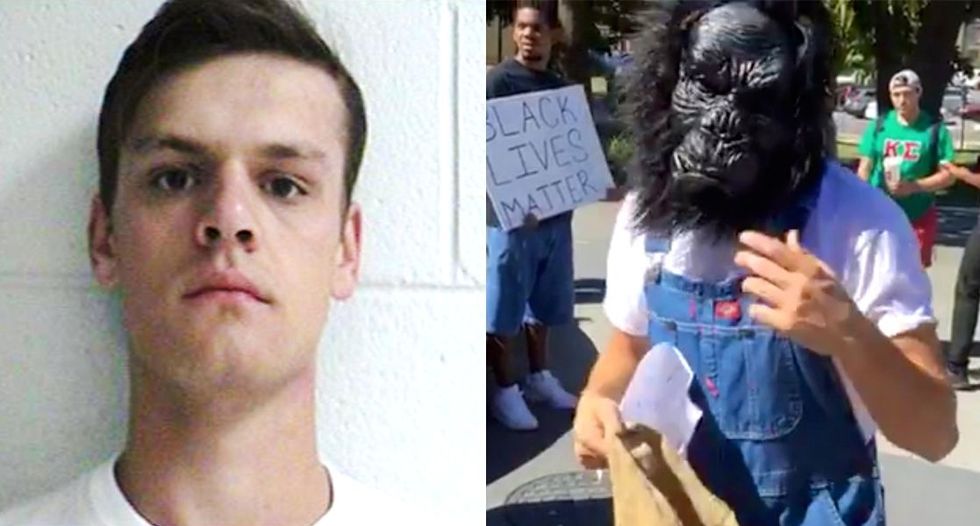 A student is no longer enrolled at a Tennessee university after attending a Black Lives Matter protest on campus wearing a gorilla mask and handing out bananas, a university official said on Friday.

The student, identified by the Eastern Tennessee State University (ETSU) Police Department as Tristan Rettke, was arrested on Wednesday on the ETSU campus in Johnson City, Tennessee and charged with civil rights intimidation.

"He is no longer enrolled at ETSU," Joe Smith, a spokesman for the university said on Friday.

It is unclear if Rettke was dismissed from the university or withdrew voluntarily. Smith said that Rettke was a freshman at the university and had been put on interim suspension immediately following the incident, but declined to comment further citing privacy issues.

The incident at ETSU comes just days after the University of Missouri suspended a fraternity that is accused of making racial slurs toward a group of black students.

A report from the ETSU campus police said that Rettke arrived at a Black Lives Matter protest on Wednesday morning dressed in overalls and wearing a gorilla mask.

The anti-racism Black Lives Matter movement arose from police slayings of mostly unarmed black men over the past two years.

Rettke was carrying bananas and a rope and tried to hand the fruit to demonstrators.

He was also carrying a burlap sack with a "rebel flag" on it, police said, using another term for the Confederate battle flag, a divisive symbol of the South's pro-slavery history.

Rettke appeared in the Washington County General Sessions Court on Thursday for an arraignment hearing, according to a court official.

Rettke's lawyer, Patrick Denton, issued a statement to the Johnson City Press that said while his client was "deeply regretful," but that "he did not intimidate or attempt to intimidate anyone during the incident."

"He respects the rights of those in the 'Black Lives Matter' movement to peacefully demonstrate in furtherance of their message in the spirit of the First Amendment," the statement said.

"That being said, despite what many may feel was objectionable behavior, Mr. Rettke has the same Free Speech protections as those in the 'Black Lives Matter' movement."

Denton could not immediately be reached for comment by Reuters.

Rettke is scheduled to appear again in court on Nov. 9.

(Reporting by Timothy Mclaughlin in Chicago; Editing by Lisa Shumaker)