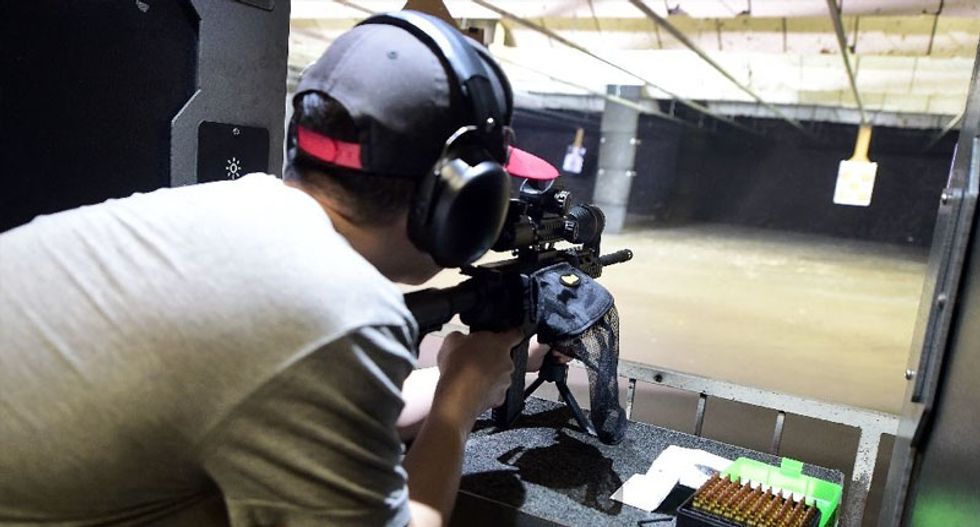 California has the strictest gun control in the United States, according to specialist site Smartgunlaws.org (AFP Photo/Frederic J. Brown)

California is a Democratic bastion in the United States, but the party's presidential nominee Hillary Clinton has some voters up in arms over her push to tighten gun control.

At the LAX Firing Range in Los Angeles, the idea of further restrictions on guns is by and large shot down.

Jim Tarbin, a retired Los Angeles Police Department officer, said that gun owners feel "besieged" in California. "There is no question about it," he told AFP.

John, an employee at the firing range who did not want his last name published, said: "Gun owners in California cannot express themselves -- they're always outvoted."

California has the strictest gun control in the country, according to specialist site Smartgunlaws.org. Rules range from compulsory background checks to limits on the capacity of firearm magazines and a ban on automatic weapons.

New measures to control access to guns are expected to be approved in a referendum coinciding with the November 8 presidential election, as public polls show two-thirds of voters want them.

Clinton, vying to be the first female US president, has promised to confront the powerful gun lobby and broaden background checks to include legal as well as mental issues.

According to her campaign, Clinton "will also support work to keep military-style weapons off our streets."

Her Republican rival Donald Trump touts the Second Amendment of the US Constitution in his campaign, declaring: "The right of the people to keep and bear Arms, shall not be infringed upon. Period."

Between eight and 11 million Californians are gunowners, according to estimates, about a quarter of the population -- the second-highest number after Texas.

A Pew Research study found that 40 percent of gun owners across the United States are Republican, twice the number of Democrats. But in California, the share of gun-toting Democrats is larger.

"We believe there's an immense number of Democrats among California gun owners," said Sam Paredes, executive director of Gun Owners of California, noting there were no official statistics on that.

As for Clinton, he warned that "people are upset she is so aggressive on guns and it will show at the polls."

Another employee at the LAX Firing Range, Justin Frew, 30 and sporting a full-blown "hipster" beard, said: "I enjoy firing guns."

Frew said he was afraid about tighter laws "because it is mostly people who have never fired guns who are limiting my rights."

Adolphus Beal, a retired set dresser for television shows, declared: "I am a Democrat. I still agree that people should have the right to own a gun."

While the vast majority of gun owners in California support measures like background checks and even obligatory gun education, they bristle at anything that limits the type or quantity of pistols, rifles and ammunition that can be bought by law-abiding citizens.

And that includes the controversial semi-automatic weapons used in the attacks in San Bernardino, California, in December -- 14 people killed -- or in Orlando, Florida, in June -- 49 victims -- or in Paris last November -- 130 dead.

Asked about the Orlando massacre, Frew replied: "The gay club? I am gay. I do not believe it is the firearm's fault. I do not feel that semi-automatic rifles should be restricted."

Paul Danner, an assistant television director, pointed out that criminals can find many ways to do harm.

"In France, they used a truck in Nice, in the Boston bombing they used pressure cookers" rigged with explosives, Danner said.

According to Smartgunlaws.org, California laws have slashed in half the number of gun victims in the past 25 years.

In what some consider to be a climate increasingly hostile to those who own firearms, "a lot of people are already moving out of state... to more gun-friendly states like Nevada or Arizona or New Mexico," said Frew.

Facing a possible "gunmaggedon" of tighter restrictions, sales of guns and ammunition have jumped in California in recent months.

"I think guns will end up being outlawed in California," he said. "I wanted to try it. It's part of our country's history."