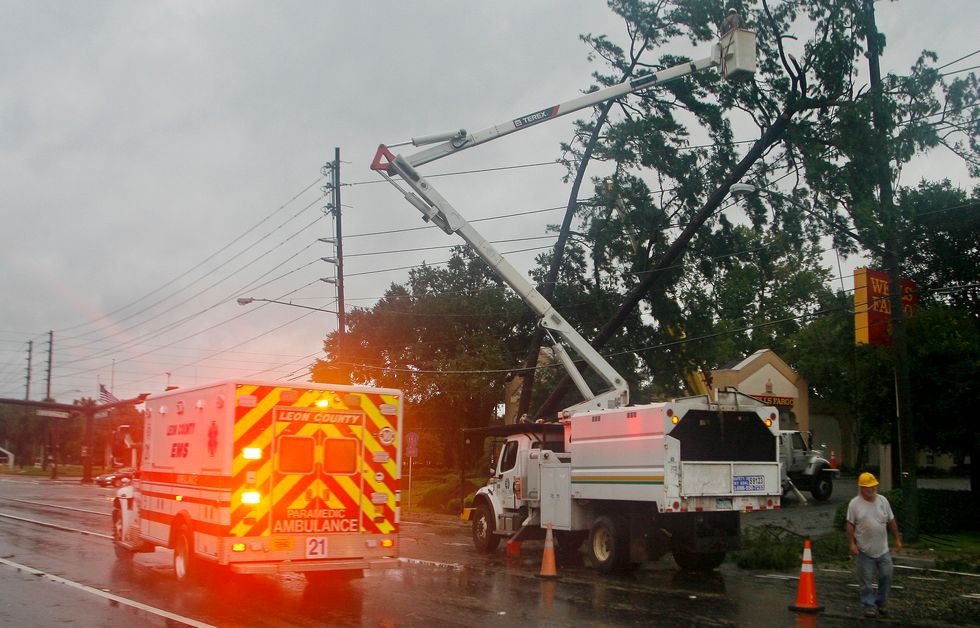 Utility crews cut tree limbs off power lines as an ambulance drives by in the rain and wind from Hurricane Hermine in Tallahassee, Florida. REUTERS/Phil Sears

A powerful Atlantic storm strengthened on Saturday afternoon after passing over North Carolina's Outer Banks en route to the U.S. Middle Atlantic coast, where it was expected to spoil the Labor Day holiday weekend with high winds, soaking rains and surging seas.

The storm, dubbed Hermine and classified as a Category 1 hurricane until it lost power while cutting across Florida and Georgia, was expected to push slowly up the coast before stalling off New Jersey, where it could linger for days.

Forecasters at the National Hurricane Center expect Hermine to turn to the northeast and decrease its forward speed on Saturday night. Winds will again achieve hurricane force of more than 74 mph (119 kph) on Sunday, they said.

"It's going to sit offshore and it is going to be a tremendous coastal event with a dangerous storm surge and lots of larger waves probably causing significant beach erosion, for the next few days," said Daniel Brown, senior hurricane specialist at the National Hurricane Center.

New Jersey Governor Chris Christie declared a state of emergency in three coastal counties of the state, which was devastated by Superstorm Sandy in 2012.

To the south, Delaware Governor Jack Markell declared a limited state of emergency for Sussex County, which includes the coastal resorts of Bethany Beach and Rehoboth Beach.

Hermine, the first hurricane to make landfall in Florida in 11 years, swept ashore early on Friday near the Gulf shore town of St. Marks with winds of 80 mph (129 kph).

The storm, which lost its tropical characteristics earlier on Saturday, left North Carolina with power outages, flooding, downed trees and power lines, while rain and tides brought flooding along Virginia's coast from Virginia Beach to Norfolk.

In the northern Florida town of Ocala, a falling tree killed a homeless man sleeping in his tent. In North Carolina, a tractor trailer overturned on a bridge over the Alligator River, killing the driver, Tyrrell County Sheriff Darryl Liverman said.

People posted pictures of flooding and high tides from North Carolina to Delaware. "Almost getting blown away from this storm on the boardwalk in Ocean City was so worth it for Dunkin Donuts," Twitter user Jessica wrote from a Maryland resort town.

In Virginia Beach, Seth Broudy, 45, owner of the Seth Broudy School of Surf, said high winds and tides flooded parking lots by his home on Saturday morning. The water and wind receded, but the ocean remained unsafe on Saturday afternoon, he said.

"Right now it’s rough as hell. It's dangerous," Broudy said in a telephone interview. "It’s just out of control. It's like sitting in a washing machine and spinning around."

Life-threatening storm surges are possible in the next 12 hours around Hampton Roads, Virginia, the hurricane center said. A surge is a rise of water above a predicted tide, pushed by high winds, and is often the greatest threat to life from a storm, according to national weather officials.

The tropical storm warning extends from Virginia to New Jersey and storm surges at the shores could reach up to 5 feet (1.5 meters) if they hit at high tide, the center said.

Virginia had 55,000 homes or businesses without power, Chesapeake and Virginia Beach reported downed trees and power outages across the cities and Norfolk was hit with up to 4 inches of rain, officials said.

Powerful winds extended up to 205 miles (335 km) from Hermine's center, the NHC said.

Officials in Atlantic City, New Jersey, canceled weekend concerts and beaches were closed in several communities. A Bruce Springsteen and the E Street Band concert set for Virginia Beach also was postponed from Saturday to Monday because of the storm.

At least 250,000 households were without power from Florida through Virginia, utility companies reported on Saturday.

The storm was projected to dump up to 7 inches (18 cm) of rain in southeast Virginia and Atlantic coastal parts of Maryland and up to 4 inches (10 cm) in southern Delaware, southern and eastern New Jersey and Long Island, Brown said.