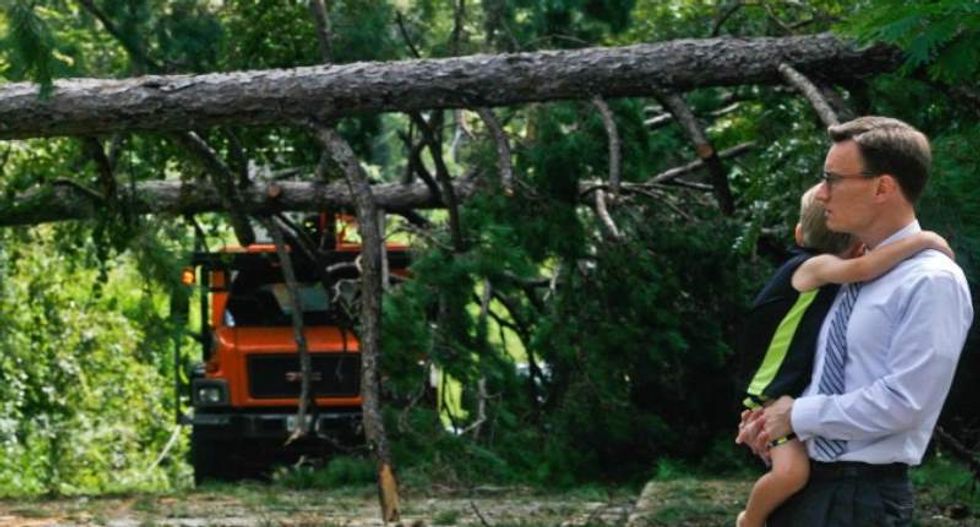 Hurricane Hermine wreaked havoc across Florida on Friday, causing widespread power outages and flooding before diminishing into a tropical storm and plowing up the Atlantic Coast into the Carolinas with a still-potent mix of high winds and heavy rains.

The first hurricane to make landfall in Florida in 11 years, Hermine swept ashore early on Friday near the Gulf shore town of St. Marks, 20 miles (30 km) south of the capital of Tallahassee, packing winds of 80 mph (130 kph) and churning up a devastating storm surge in coastal areas.

State officials said electricity had been knocked out to nearly 300,000 homes and businesses by afternoon.

One storm-related death was reported by authorities in the northern Florida town of Ocala, where a fallen tree killed a homeless man sleeping in his tent.

While maximum sustained winds had weakened to 50 mph (80 kph), the tempest headed to the Atlantic seaboard along a path inhabited by tens of millions of Americans, prompting storm watches and warnings as far north as Rhode Island.

Becker said localized flooding hit low-lying areas across the state, and there were widespread reports of "downed power lines, downed trees, trees on cars and some flooded cars," along with isolated incidents of tree-damaged homes.

One mobile home was virtually sliced in two by a fallen tree, but authorities had no reports of serious storm-related injuries or fatalities, Becker added.

Likewise, emergency officials reported no storm deaths in Georgia, which Hermine swept through on its way to South Carolina, but said at least 100,000 utility customers were without power at one point.

Emergency declarations remained in effect for all or parts of Florida, Georgia, North Carolina, Virginia and Maryland.

The storm was projected to creep north along the Carolina coast Friday night, then gather strength after moving offshore into the Atlantic on Saturday morning, possibly reaching near-hurricane intensity by late Sunday, according to the National Hurricane Center.

In addition to powerful winds extending up to 185 miles (295 km) from its center, Hermine was expected to unleash a dangerous storm surge in the Hampton Roads area of tidewater Virginia, where flooding could become 3 to 5 feet deep, the NHC warned.

The storm also could douse several southeastern and mid-Atlantic states with up to 15 inches (38 cm) of rain through Sunday, the agency said.

New Jersey, still mindful of devastation from superstorm Sandy in 2012, was on high alert as emergency officials advised residents to prepare for flooding, high winds and a surge of seawater.

New York City Mayor Bill De Blasio said residents should avoid beach waters for fear of life-threatening riptides. "I say that to people who go the beach, I say that to surfers: Don't even think about it," De Blasio told reporters.

In Florida, concerns over the standing water in which mosquitoes breed intensified as the state battled an outbreak of the Zika virus.

"It is incredibly important that everyone does their part to combat the Zika virus by dumping standing water, no matter how small," Florida Governor Rick Scott told a news conference.

Overnight, crews in Pasco County, Florida, rescued more than a dozen people after their homes were flooded.

Richard Jewett, 68, was rescued from his home in New Port Richey, just north of Tampa, as emergency teams carried out a mandatory evacuation.

"The canal started creeping up toward the house, and even though it wasn't high tide it looked like it was coming inside," Jewett said.