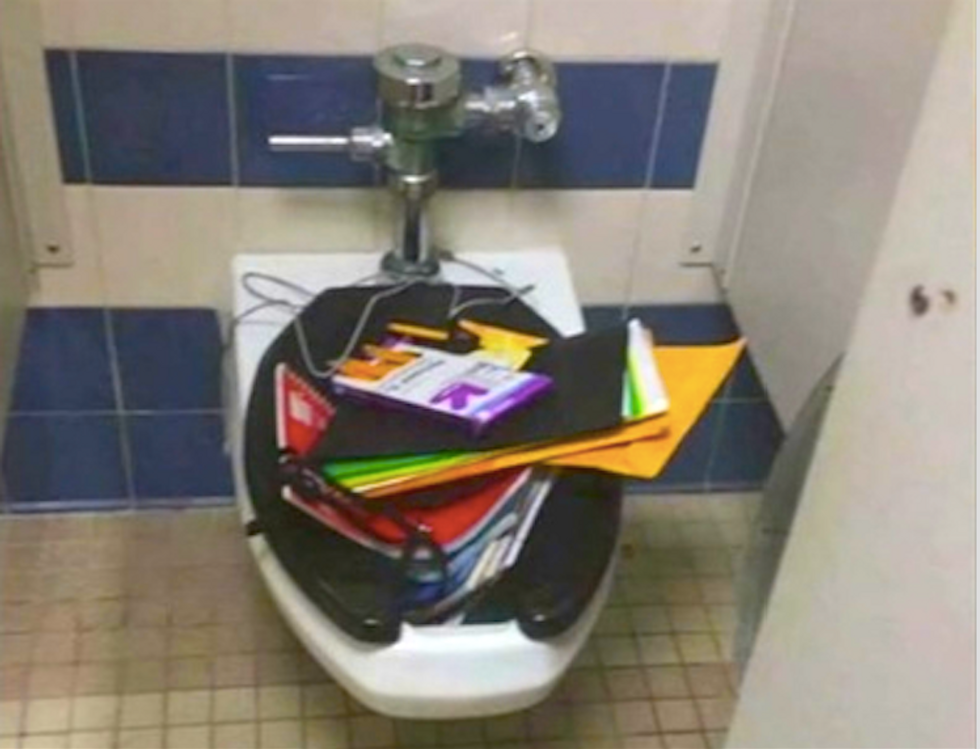 A deaf high school senior in Omaha, Nebraska was the victim of a cruel prank this week when bullies took his backpack away and emptied the contents -- including the battery for his cochlear implant hearing aid -- into a school toilet.

KMTV reported on the story of Alexis Hernandez, a student at Omaha's Burke High School, who looked around for his book bag during his lunch period on Wednesday and realized that it was gone.

He immediately notified school officials, who reviewed security footage but were unable to identify the two male students who waited until Hernandez left his table and then walked off with his belongings. School staff searched the school grounds for the bag to no avail.

Later, Hernandez' homework, school supplies, tablet computer, hearing aid and debit card were found dumped into a toilet. Everything was ruined. He took a photo of the damage that was posted on social media and subsequently went viral.

Hernandez lost his hearing when he was just one year old. All his life, he said, he has been subject to teasing and bullying over his disability and the surgery scars he still bears next to his ears.

"Those students think it's OK to bully a deaf student, but it's not," Hernandez said. "It's not OK to bully someone who is disabled, deaf or hard of hearing. Or anyone for that matter."

The belongings can be replaced, and Hernandez' friends set up a Go Fund Me site to raise money that quickly met its goal. The teen said, however, that he will never get back the hours of work he put into an English project which was inside one of his drenched notebooks.

"I was very upset because I know I work really hard on my project and homework because I just want to make my mom to be happy and know that I did a good job," he said.

Hernandez' mother said that the school now knows the names of the the boys who stole the backpack. They claim they didn't know her son was deaf. One boy has been suspended and the other is still under investigation by school officials.

"I just want to talk to them; I don’t want to fight them," the teen said. "I want to talk it out. And talk to their parents about them so they can tell them they need to teach them the right thing to do."