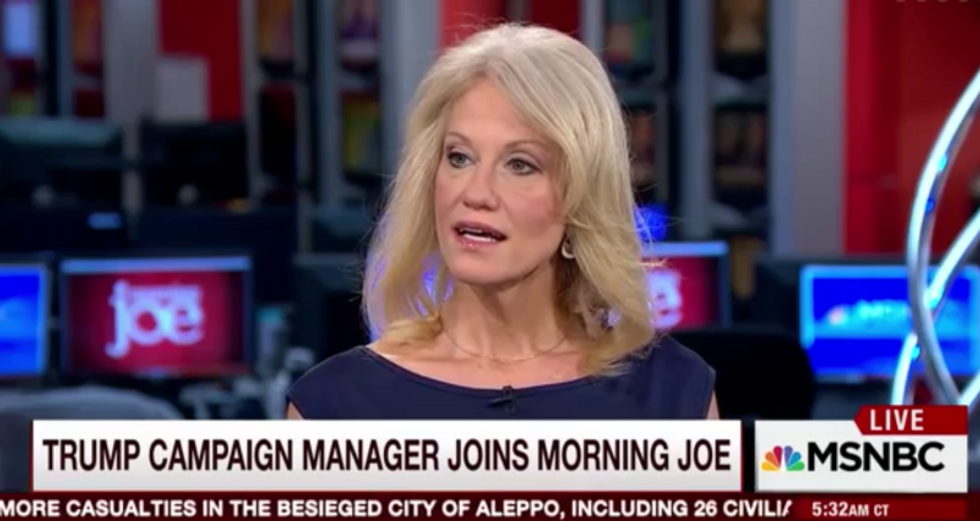 "He made a factual claim about the moderator, who deserves to be treated fairly, and it was just wrong," said Halperin. "And it's a metaphor for his frequently, in public, stating things with no basis."

"I think it's a terrible and irrelevant example," Conway shot back, before proceeding to completely dodge Halperin's question. "And here's why: We were appalled at the treatment of NBC News's Matt Lauer after the Commander-in-Chief Forum."

"That's not what I'm asking you," Halperin interjected. "I'm asking you how someone who's running for president can assert, on the eve of the debate, that the moderator is a Democrat, which is factually incorrect. How can he do that?"

Conway again tried to spin this by saying that Trump's overall point was that the media is filled with registered Democrats.

A little bit later in the segment, after Conway repeatedly refused to answer questions about Trump's false assertions, Mika Brzezinski bluntly asked her, "Why did he lie about Lester Holt?"

"He didn't lie," Conway shot back. "A lie would mean that he knew the man's party registration."

Halperin then asked Conway if Trump would simply say things that are false without bothering to check on their veracity.

Conway didn't seem to have an answer to that.