Michelangelo painted a 'secret feminist code' in the ceiling of the Sistine Chapel, says new study 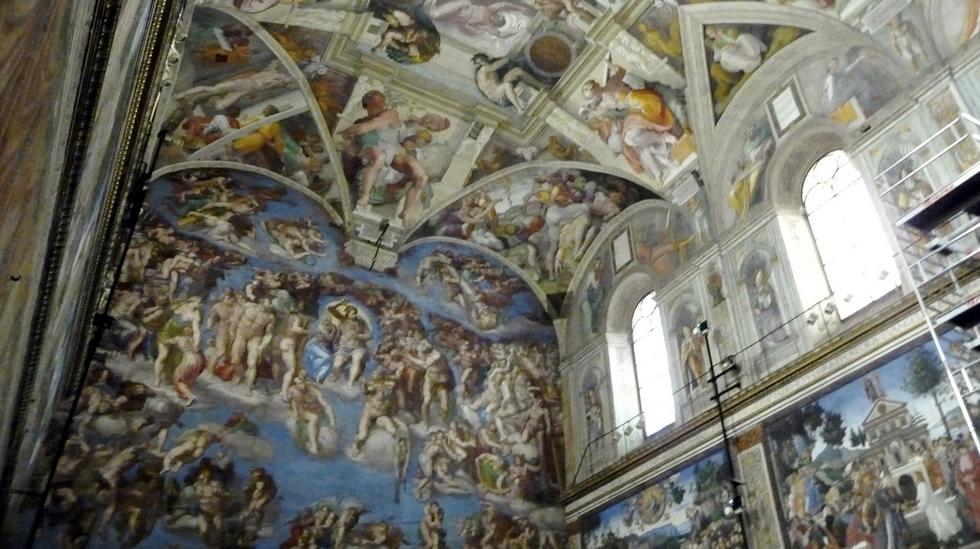 The ceiling of the Sistine Chapel (Flickr Creative Commons)

Researchers say that Renaissance painter and sculptor Michelangelo hid multiple symbols of female reproductive organs and pagan symbols for femininity and fertility within his art in Rome's Sistine Chapel.

The Daily Mail reported Friday on work by a team of researchers from Porto Alegre, Brazil's Federal University of Health Sciences who say that the artist flouted Catholic religious law by quietly inserting the symbols into his work.

The study's lead author, Dr. Deivis de Campos said that eight of the ram skulls painted around the chapel dome are meant to echo the shapes of a uterus, ovaries and fallopian tubes. Male and female figures representing Adam and Eve are positioned so that Eve's arms are located at the center of the ceiling. The painter styled them into the form of a chalice, a pagan symbol of fertility.

Dr. de Campos and his colleagues presented their findings in the academic journal Clinical Anatomy. The study abstract said:

A number of published articles have suggested that each element of Renaissance art contains an inner meaning. Some of these elements include the choice of theme and protagonists, faces selected for the characters, colors used, species of flowers and trees chosen, animals depicted, positions of the elements, posture of the characters and their gestures, juxtapositions in the scenes, and even the very scenario or landscape. All of these elements are thought to have hidden meanings. In this context, this manuscript presents a new hypothesis suggesting that Michelangelo Buonarroti (1475–1564) may have concealed symbols associated with female anatomy in the ceiling of the Sistine Chapel (painted 1508–1512) in Rome. Thus, this paper is useful to better understand the history of anatomy and corroborates recent descriptions that have suggested the possible existence of anatomic figures concealed in many of Michelangelo's works.

Michelangelo took on the enormous task of painting the chapel only reluctantly, preferring to devote himself to sculpture and his ongoing study of the human form. Anatomical drawings -- which were generally carried out through close study of dissected cadavers -- were forbidden under Papal law, so it is believed that the artist was thumbing his nose at Catholic doctrine even as he undertook the commission from Pope Julius II.

In the four years it took to complete the work, de Campos said, "Michelangelo often introduced anatomic figures, sexual innuendos and rude insults to patrons without them being aware," as did many other artists of his time.

"For him, Christianity was not superior to any other form of religion," the researcher continued. "Being a devotee of the simplicity and perfection of ancient pagan Greco-Roman art, Michelangelo idolized all the teachings associated with the sacred feminine. This is because the power of women and their ability to produce life was held very sacred in ancient pagan and Jewish teachings. However, this threatened the rise of the predominantly male Catholic Church."

He concluded, "Thus, we postulate that Michelangelo concealed the symbols associated with female anatomy because he knew that the Pope would never favour such representations."

This is not the first time that researchers have discovered what they believe to be anatomical drawings in the 5,381 square foot painting. In 2010, Ian Suk and Rafel Tamargo from Johns Hopkins University School of Medicine said that the ceiling's final panel contains a precise depiction of a human spinal column.

Upon closer inspection, they also found the outlines of a human brain hidden in one of the artist's depictions of God.