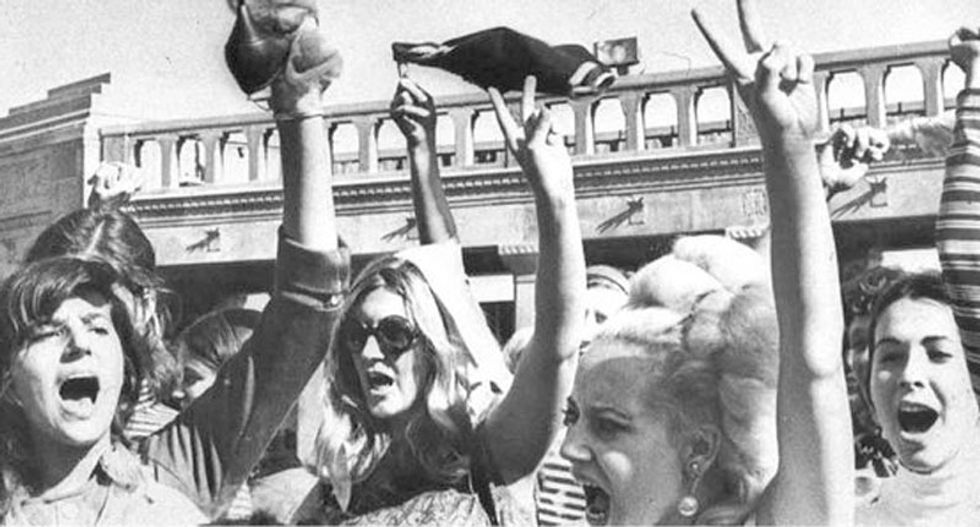 At this year’s Miss America pageant, the first openly lesbian contestant, Erin O'Flaherty, will compete for the crown in Atlantic City. Flaherty’s participation will represent yet another step toward a more inclusive and diverse pageant. She’ll be following other trailblazers like Bess Myerson (the first Jewish titleholder), Vanessa Williams (the first African-American titleholder) and Heather Whitestone (the first deaf titleholder).

For a pageant with a historically narrow definition of beauty, this progress hasn’t come easy.

The most well-known demonstration against the pageant is the 1968 liberation picket, in which hundreds of women protested the pageant’s oppressive ideal of femininity and, so the media myth goes, burned their bras. But few people know that yet another protest took place that day just a few blocks away: the first-ever Miss Black America contest. The rival contest was organized to challenge the racial exclusion of the Miss America pageant, which had never had a black contestant.

When I was a graduate student in history at Duke University, I had set out to research the Sept. 7, 1968, women’s liberation demonstration in Atlantic City. Early on, however, I was struck by the news headlines announcing the new Miss Black America alongside the white Miss America. I was also surprised to learn that women’s liberation protesters objected to not only the sexism of the pageant, but also its racism.

I found that the Miss America pageant was dogged by two protests that day – not one – and each had been influenced by the other.

During the 1930s – the pageant’s early years – regulations explicitly stipulated that contestants must be of “the white race.”

But by 1968, the Atlantic City chapter of the National Association for the Advancement of Colored People was determined to break the beauty queen color line. In a meeting with pageant officials, chapter leaders pushed for integration. The pageant responded with nominal changes: Organizers added black judges and set up a scholarship fund to encourage black contestants. But without any black state finalists in the ranks, it was too late for any to participate in the 1968 national event.

Dismayed that black women would be sidelined for yet another year, an activist named Phillip Savage and an entrepreneur from Philadelphia named J. Morris Anderson teamed up to create their own all-black pageant to take place in Atlantic City during the Miss America pageant.

As Savage told reporters: “We want to be in Atlantic City at the same time the hypocritical Miss America contest is being held. Theirs will be lily white and ours will be black.” The aim of Miss Black America was to celebrate black women as beautiful, in defiance of American cultural norms that upheld whiteness as the standard of beauty.

On the day of the event, black beauty queens rode in a motorcade down the Atlantic City boardwalk before taking the stage of the Ritz-Carlton hotel for swimsuit, talent and evening gown competitions.

The winner – a college student named Saundra Williams – was dressed in a white gown and tiara, much like any Miss America hopeful. But she also wore her hair in a short natural style, performed an African dance as her talent and defended black women as beautiful to reporters. In newspapers across the country, her portrait appeared prominently alongside the newly crowned Miss America, Judith Ann Ford.

In this parallel beauty contest, the organizers and contestants were making a pointed public criticism of the Miss America pageant’s discriminatory practices. But they were also challenging racist standards of beauty in order to fully afford black women their humanity and belonging in the nation.

Meanwhile, the nascent women’s liberation movement was making rumblings of its own.

In the previous year, women around the country had begun discussing and raising awareness of the sexism ingrained in everyday American life. A loose network of women’s liberation groups soon formed across many cities, and they started planning their first major coordinated protest.

Their target? The Miss America pageant.

Many now hail it as the opening salvo of the second-wave feminist movement in America. Less well known is that they saw the pageant as the nexus of many problems with American society: racism, war, capitalism and even ageism. The organizers had roots in radical leftist causes, including the civil rights and anti-Vietnam War movements.

Upon descending on Atlantic City, women’s liberation protestors distributed a leaflet that proclaimed “No More Miss America!” In it they denounced the pageant as “Racism with Roses,” a pointed critique of an event that put white women on a pedestal while ignoring African-American, Latina and Native American women.

Thumbing through handwritten organizing notes and watching video footage of the protest, I also discovered how an African-American lawyer and activist named Florynce Kennedy had played a prominent role in the protest. In the 1960s and ‘70s, Kennedy was involved in a number of movements, including black power, consumer protection and sex workers’ rights. She was known for her theatrical style of demonstrating and intersectional politics – and was always eager to draw connections between racist and sexist oppression.

Kennedy’s participation on the boardwalk was no exception. To emphasize how women were enslaved to beauty standards, she chained herself to a giant puppet of Miss America. Another demonstrator conducted the proceedings as a cattle auction, announcing, “Yessiree boys, step right up! How much am I offered for this number one piece of prime American property? She sings in the kitchen, hums at the typewriter, purrs in bed!”

The protests live on today

Thanks to civil rights and feminist activists, 1968 was perhaps the most exciting year in the Miss America pageant’s history. Newspapers and magazines delighted in the drama of the three events and broadcast the activists’ messages to a mass audience.

The Miss Black America contest, despite starting with only 12 contestants, went on to become an annual event in its own right. The women’s liberation protest instantly became a symbol of the movement, even if it was met with derision from conservative commentators.

The following year, the Miss America pageant grappled with the fallout from 1968 by trying to retain wary sponsors and issuing a restraining order against protesters. But the franchise did evolve in response to the civil rights and feminist movements, placing more emphasis on women’s abilities and finally featuring a black contestant in 1970.

The legacy of these protests lives on when Americans are captivated by what Erin O'Flaherty represents: a progressive step toward a more inclusive pageant and, by extension, nation. But O'Flaherty’s chances will undoubtedly hinge on her ability to conform, in many ways, to what remains a heteronormative and Eurocentric ideal of American womanhood and physical beauty.

For this reason, the protestors' goal to dismantle or wholly reshape that ideal resonates today.