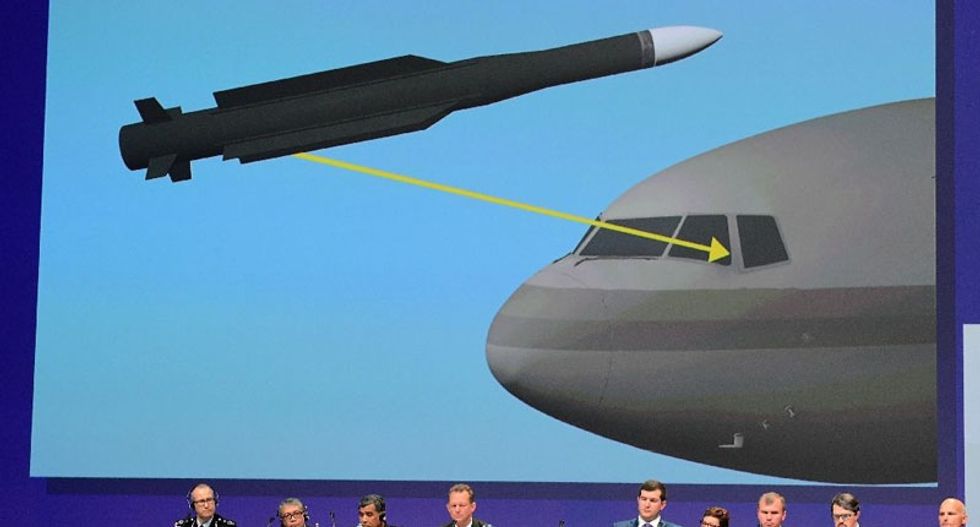 Dutch investigators present the results of the criminal probe into the downing of Malaysia Airlines Flight MH17, during a press conference in Nieuwegein, on September 28, 2016 (AFP Photo/Emmanuel Dunand)

The missile that downed Flight MH17 over eastern Ukraine was transported from Russia, a criminal inquiry revealed Wednesday, adding that more than 100 people were under investigation for the 2014 disaster.

The investigators also confirmed that the missile which slammed into the Malaysia Airlines plane was fired from a field in a part of eastern Ukraine under the control of pro-Russia separatists at the time.

But the Dutch-led investigation did not directly accuse Moscow of supplying the BUK missile and its transporter system -- and the Russian government has repeatedly denied any involvement.

The Malaysia Airlines passenger jet was blown from the skies in July 2014 during a flight from Amsterdam to Kuala Lumpur, killing all 298 people on board including 196 Dutch citizens.

"Based on the criminal investigation, we have concluded that flight MH17... was downed by a BUK missile of the series 9M38, that came from the territory of the Russian Federation," said Wilbert Paulissen, the head of the Dutch police investigation.

Afterwards the missile launcher system "was taken back to Russia," he added.

Using photos, videos, witness statements and telephone conversations, the investigators have retraced the route taken by the convoy which brought the missile system into eastern Ukraine.

But to the frustration of relatives, the investigators did not name any suspects at their briefing in the central town of Nieuwegein, near Utrecht.

The BUK was fired from a field in Pervomaiskyi which at the time "was in the hands of the Russian separatists," said Paulissen.

The joint investigation "has identified approximately 100 people" believed to have had an "active role" in the transporting of the missile system used to bring down the routine flight, chief investigator Fred Westerbeke said.

The investigation has been headed by the Dutch prosecution service, but includes teams from Australia, Belgium, Malaysia and Ukraine.

They first met relatives of the victims on Wednesday to discuss the results.

"What is clear is that the BUK missile system came from Russia to Ukraine, was fired and taken back to Russia. That clearly suggest the involvement of the Russian Federation," Piet Ploeg, who lost three relatives in the disaster, told AFP.

But so far no one has been charged in the investigations, and relatives of the victims are anxious for justice.

"Apart from wanting to know exactly what weapon was used and where it was fired from, we also want an answer as to where we go from here," said Evert van Zijtveld, chairman of the foundation that supports families of MH17 victims.

"We want to see the perpetrators caught and put on trial," he told AFP. Zijtveld lost his 18-year-old son Robert-Jan and daughter Frederique, 19, in the tragedy.

On Monday, Russia again sought to deflect the blame for the MH17 disaster, releasing what it said were radar images showing that no missile fired from rebel-held territory in the east could have hit the plane.

"The data is unequivocal and on that data, there is no missile. Therefore if there was a missile it could have been launched only from a different territory," he said.

Ukraine and the West insist pro-Russian rebels blew the jet out of the sky with a Russian-made missile system likely supplied by Moscow.

The tragedy saw the European Union slap tougher sanctions on Russia -- blamed by the West for being behind the rebellion. The punitive measures remain in place as the fighting drags on.

But Russia and the rebels have consistently denied any role in downing the plane, and have instead blamed Ukrainian government forces.