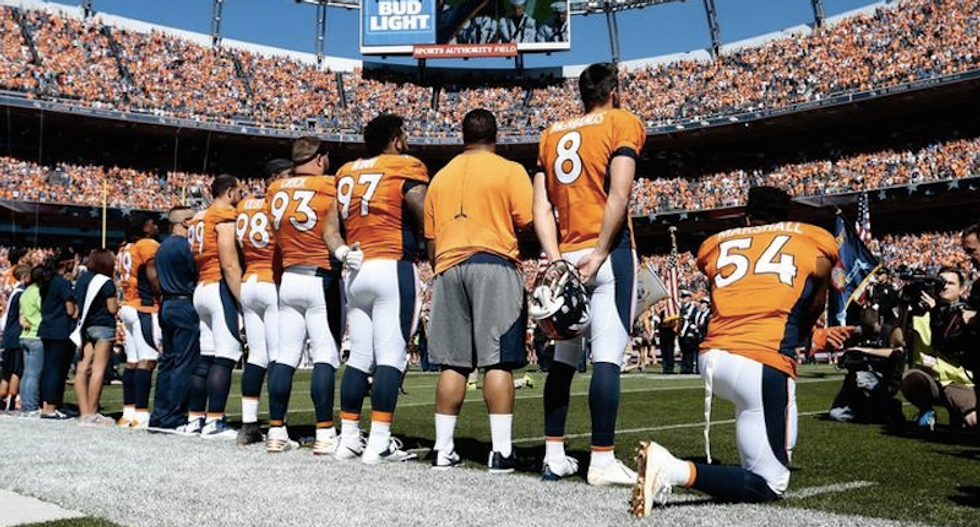 Denver Broncos inside linebacker Brandon Marshall (54) kneels during the National Anthem prior to the game against the Indianapolis Colts at Sports Authority Field at Mile High. (Mandatory Credit: Isaiah J. Downing-USA TODAY Sports)

Three Miami Dolphin players also "took a knee" before their game against the New England Patriots as public protests continued in the National Football League aimed at drawing attention to racial inequality.

NFL Commissioner Roger Goodell weighed in before Sunday night's game between the Minnesota Vikings and visiting Green Bay Packers, saying he was encouraged by the direction players were taking their demonstrations.

"I truly respect our players wanting to speak out and change their community," Goodell said, according to the New York Times. "We don't live in a perfect society. We want them to use their voice."

"And they're moving from protest to progress and trying to make things happen in communities," he added, with a nod toward the community work some players are engaging in.

Kaepernick started what has become a controversy when he began the gesture against injustice and police brutality by refusing to stand for "The Star-Spangled Banner" during preseason games.

On Sunday, he and 49ers safety Eric Reid again knelt for the national anthem before their game against the Carolina Panthers, while safeties Antoine Bethea and Jaquiski Tartt, linebacker Eli Harold and cornerback Rashard Robinson raised their right fists.

In Los Angeles, Quinn also held his right fist high during a rendition of the national anthem by American singer-songwriter CeeLo Green ahead of the Rams' regular season home opener against the Seattle Seahawks.

The gesture by Quinn, 26, who is African-American, recalled the raised fist demonstration by black athletes Tommie Smith and John Carlos during their medal ceremony at the 1968 Olympic Games in Mexico City.

The protesting players have been seen as allies of the Black Lives Matter movement, which grew in response to a string of high-profile police killings of unarmed black people across the country. About two-thirds of NFL players are black.

The protests have also provoked anger in some fans who see the gesture as disrespecting the U.S. flag, the military and the nation in general.