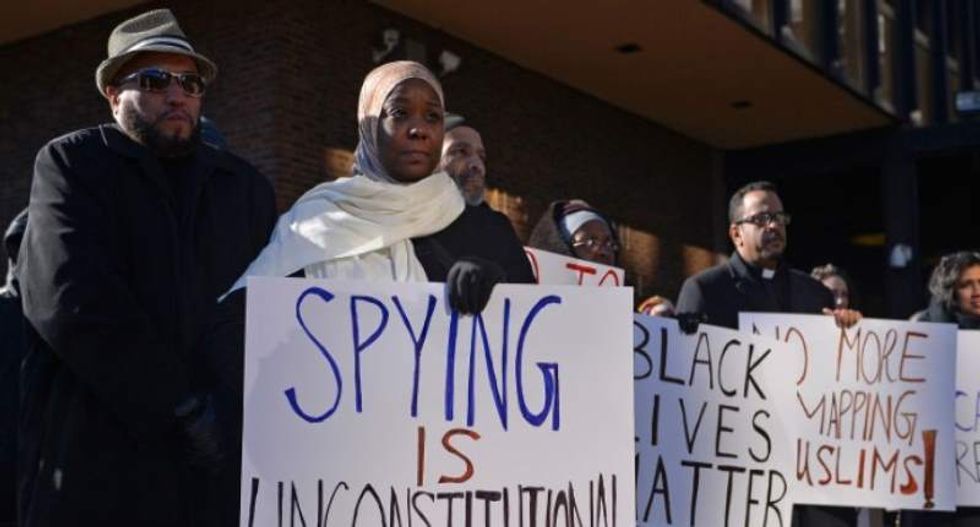 Kameelah Rashad participates in a rally for Muslim rights outside of the James A. Byrne Federal Courthouse in Philadelphia on Jan. 13, 2015. (Reuters/Charles Mostoller/File Photo)

A number of U.S. cities are introducing proposals to mandate community oversight of police use of digital surveillance technology as evidence mounts that black or poor neighborhoods are being more heavily scrutinized than others, civil rights activists said on Wednesday.

The legislative measures are being introduced by lawmakers in 11 cities from Seattle to Washington, D.C., and are backed by a coalition of 17 groups led by the American Civil Liberties Union and the National Association for the Advancement of Colored People.

"(We need) to build the legislative power of local communities to prevent high-tech racial profiling and policing from turning our neighborhoods into open-air prisons," Malkia Cyril, executive director of the Center for Media Justice, told reporters on a conference call during which the proposals were announced on Wednesday.

The coalition said the proposals stemmed from the growing use by departments across the country of high-tech equipment or software, some of which was developed for battlefields, to surreptitiously monitor poor or predominately black neighborhoods, Muslims, or the street-level movements of activists within the Black Lives Matter movement.

The proposed bills would mandate city council approval of the use and purchase of surveillance equipment, and input and oversight from communities on how it is used.

"We want to give municipalities the ability to say 'no,'" Cyril said.

Proposals were introduced on Wednesday in Miami Beach and Pensacola, Florida, and others were expected in the coming weeks in New York City, Milwaukee, Muskegon, Michigan, and other localities, the American Civil Liberties Union (ACLU) said.

Palo Alto, California, will vote on its proposal later in September, and Hattiesburg, Mississippi, is introducing legislation in October, the ACLU said.

Police departments across the United States are facing intense scrutiny over the use of excessive force especially against black people, accountability and accusations of racial bias.

Police officials have said digital surveillance tools are needed for crime prevention and pointed to reduced crime in some areas where they are used.