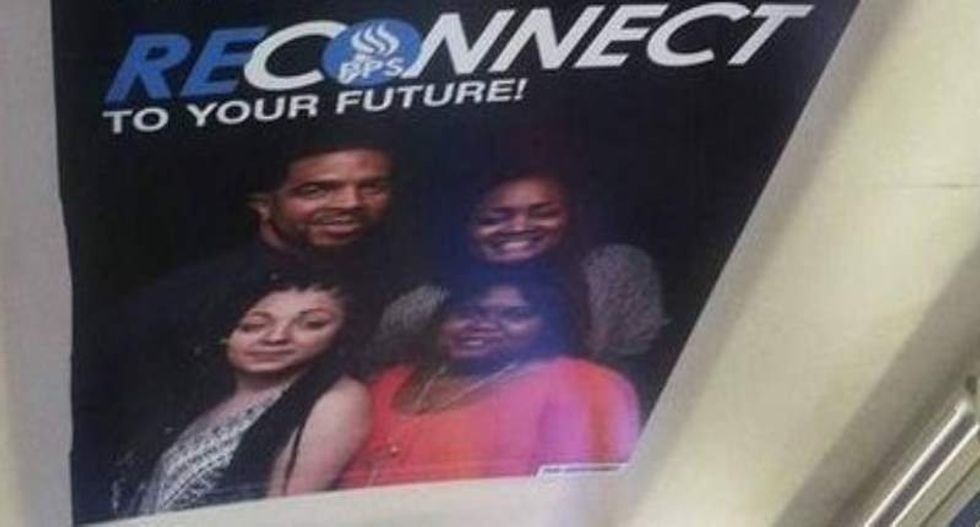 An ad promoting Portland Public Schools' 'Reconnect to your Future' program is seen on a local bus. (The Oregonian)

Officials with the Portland Public Schools district will withdraw a poster promoting a program seeking to help school dropouts after complaints that the image only featured students of color, the Oregonian reported.

"This particular ad includes students who graduated as a result of outreach efforts and the staff who are on the Reconnection Services outreach team," district spokesperson Courtney Westling said. "However it does not represent the students of all races and ethnicities that have been successful through the efforts of our reconnection work, nor does it represent all the races and ethnicities of students that need to be reengaged."

The posters, which had been featured around the city, were part of the district's "Reconnect to your Future" campaign, which is devoted to helping students who left school before completing their coursework find a new campus. Students are not allowed to take part for longer than one semester.

But while she supported the campaign itself, Julie Esparza Brown -- the only member of the local school board who is not white -- said she had an issue with the ad.

"I looked at that and said, 'Whoa this is a problem we need to fix,'" said Brown. "The message is we only expect our kids of color to be dropping out. What kind of message is that sending to our kids?"

According to the Oregonian, Portland Public Schools had the highest dropout rate among large school districts in the state as recently as 2013, including state-high dropout rates for low-income students, as well as Native American, Asian-American, black and Latino students.

Brown's colleague Paul Anthony also filed a federal complaint in July accusing the district of discriminating against students of color.

She also blamed a "short staffed" central office for not only the ad promoting the Reconnect program, but a recent directive banning rap music from school buses. The latter order was later walked back in favor of having bus drivers "use their best judgement" regarding music on their vehicles.

" These two instances highlighted that sometimes there is a need to go down and make sure we are looking at our messages from all angles," Brown said. "It's not an excuse. We really need to be transparent in that these kinds of messages we are sending are not acceptable. We can't make these kind of errors it's harmful to our students."