NC Gov. McCrory busted for answering staffers' questions at event -- and claiming they came from media 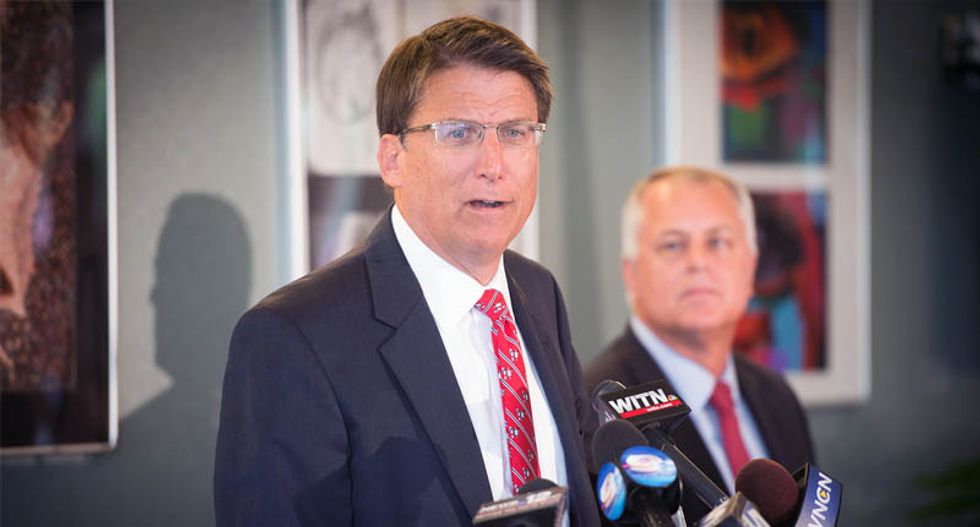 Staffers for North Carolina Gov. Pat McCrory (R) planted softball questions for him during a public appearance and passed them off as coming from the Charlotte Observer, reports the newspaper.

The newspaper's editorial page editor, Taylor Batten, wrote that when he attempted to ask McCrory a question during the event on Thursday, the governor brushed him off, saying, "We've got three Observer questions answered already. I think you guys dominate the news enough."

Later, a spokesperson for McCrory's re-election campaign said his staff was asked by the host venue, Hood Hargett Breakfast Club, to provide the questions in writing " to keep the conversation format going"

But the club disputed that account, saying that not only did the campaign insist that all questions be submitted in writing before McCrory's appearance -- a change from the club's usual policy -- but that its own questions be included and falsely attributed to the newspaper.

Batten reported that he intended to ask the governor about HB2, the anti-LGBTQ law that has already led the NBA and the NCAA to pull events out of the state, when McCrory rebuffed him.

After the event ended, he wrote, McCrory "ducked out a side door and down a hall that led to a back exit. I followed him to try to ask him about HB2, but his staff blocked me."

An hour later, Batten said, the governor called him and said that passing laws banning discrimination against LGBTQ residents is a job for Congress, not state lawmakers.

"I wish the federal government would have this discussion," said McCrory.

He also complained during the event about the NCAA's decision to move seven championship events out of the state.

"The NCAA met without our knowledge. Did not even call us about boycotting the state of North Carolina -- the ninth-largest state in the United States of America," he said. "No courtesy phone call whatsoever. No opportunity to tell them, 'Guys this is all in the court system right now. The Supreme Court's gonna decide this.'"