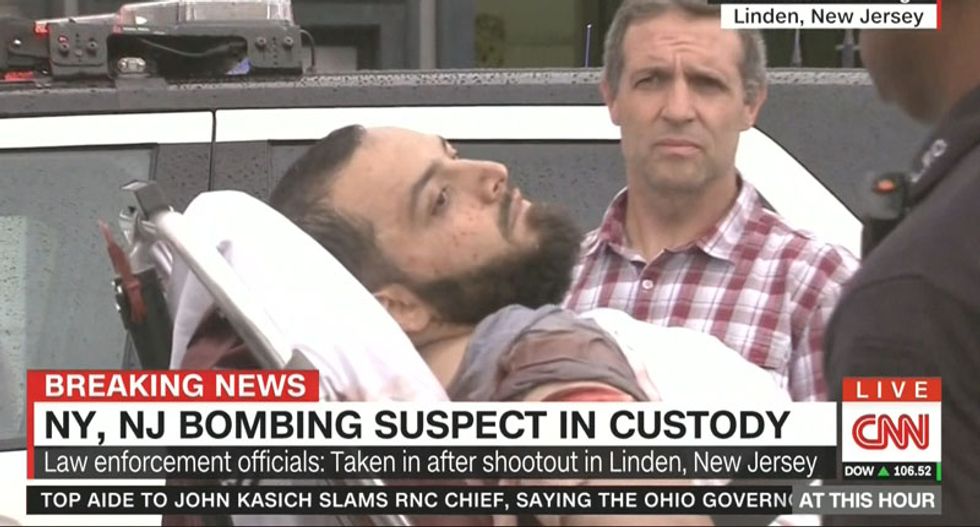 A lawyer for an Afghan-born U.S. citizen charged with bombings in New York and New Jersey over the weekend asked a federal judge to schedule his first court appearance for Wednesday, possibly in his hospital bed.

Ahmad Khan Rahami was arrested on Monday after a gunfight with police in Linden, New Jersey. He is now receiving treatment for his wounds at a Newark hospital, where he could formally face his charges if he cannot travel to the U.S. District Court in Manhattan, his lawyer said.

"He has been held and questioned by federal law enforcement agents since his arrest," David Patton, head of the New York city federal public defenders office said in a court filing. "The Sixth Amendment requires that he be given access to counsel on the federal charges, and that he be presented without delay."

Patton also asked to meet with Rahami, 28, on Wednesday. Police also say they have not yet been able to interview Rahami.

Federal prosecutors said Rahami injured 31 people in Manhattan's Chelsea neighborhood with a homemade bomb on Saturday night in a case that investigators now regard as terrorism.

He is also charged with planting bombs that went off in Seaside Park, New Jersey, and his hometown of Elizabeth, New Jersey, but did not injure anyone. He faces charges from federal prosecutors in both states.

"Inshallah (God willing), the sounds of bombs will be heard in the streets," Rahami, who came to the United States at age 7, wrote in a journal he was carrying when arrested. "Gun shots to your police. Death to your oppression."

The attacks were the latest in a series in the United States inspired by militant groups including al Qaeda and Islamic State. A pair of ethnic Chechen brothers killed three people and injured more than 260 at the 2013 Boston Marathon with homemade pressure-cooker bombs similar to those used in this weekend's attacks.

In the past year, an Orlando gunman and a married couple in San Bernardino killed dozens in mass shootings inspired by Islamic State.

The incidents inflamed the U.S. debate about security and immigration.

Federal investigators were probing Rahami's history of travel to Afghanistan and Pakistan, and looking for any evidence that he may have been radicalized or trained in bomb-making on those trips. They still are trying to find out whether he received any help in planning his attack or building the bombs.

His father, Mohammad Rahami, told reporters outside his family's chicken restaurant on Tuesday that he had called the Federal Bureau of Investigation about two years ago to report concerns about his son's involvement with militants.

The FBI confirmed that it had looked into the younger Rahami after what it called a "domestic dispute" but found no evidence tying him to terrorism.

The charging documents lay out a wide swath of evidence pointing to Rahami as the bomber. Surveillance video places him in the area, and his fingerprints were on unexploded devices including a pressure-cooker bomb found blocks away from the blast.

If Rahami's first court appearance occurs in the hospital bed, he would not be the first U.S. terrorism suspect to be charged in such a venue.

Dzhokhar Tsarnaev, who was convicted last year for his role in the Boston Marathon attacks and sentenced to death, also first faced charges in his hospital bed while he was still recovering from injuries sustained in a gunfight with police.