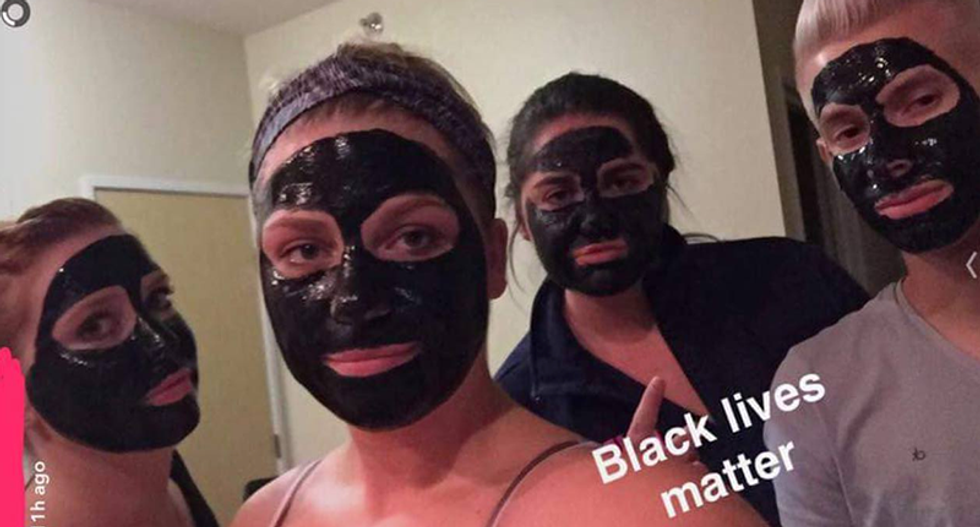 Earlier this week, University of North Dakota students stole an African-American student's phone and posted photos of themselves in blackface with a caption reading "Locked the black b*tch out." It referred to the fact that the girls locked the fellow student out of a dorm room.

While the university said it was in the process of investigating the incident, it happened once again. According to KFYRT, the school is now being forced to investigate yet another incident of white female students who put on blackface and posted it on social media with the caption "Black Lives Matter."

One facebook user posted the picture and tagged UND saying, "the problem is growing worse here at UND."

A spokesperson told KFYRT that they are investing the incident but confirmed that the girls photographed do attend the school.

The school's president released a statement Thursday saying that he is appalled that within 48 hours two photos surfaced of students in blackface mocking the African American community. He admitted that the school clearly has a lot of work to do.

"I am appalled that within 48 hours two photos with racially-charged messages have been posted on social media and associated with the UND campus community," university president Mark Kennedy said in the statement. "It is abundantly clear that we have much work to do at the University of North Dakota in educating our students, and the entire university community on issues related to diversity, inclusion, and respect for others."

Kennedy went on to explain how disappointed he is that he has students who don't understand such things are inexcusable.

"Our mission is educational in nature," he continued. "Our student conduct process is educational in nature. This is our opportunity to provide an education to all members of our campus community, especially those who may not understand the gravity of their actions. Based upon my conversations with students and others, I can assure you that the messages of the two photos are painful to many individuals."

He revealed that the virality of the story has caused many within the campus as well as alums to reach out with concern for the school. They "are encouraging us to use this situation as an opportunity to address what some see as long-standing issues within our community and across the country," Kennedy said.

He closed his statement saying the school values diversity and inclusion seriously.