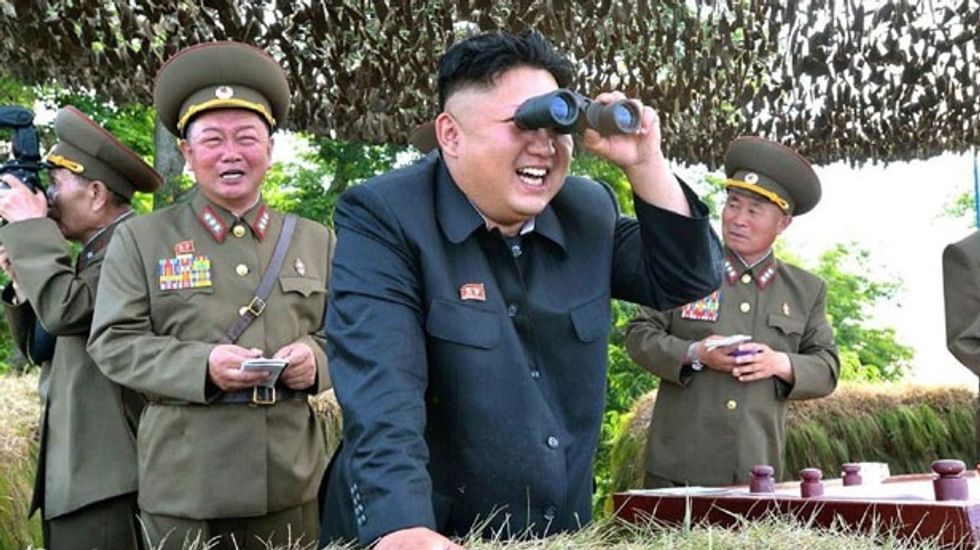 North Korea claimed Friday it had successfully tested a nuclear warhead that could be mounted on a missile, drawing condemnation from the South over the "maniacal recklessness" of young ruler Kim Jong-Un.

The blast at the Punggye-ri nuclear site was the North's fifth and most powerful yet at 10 kilotons -- approaching the might of the bomb that devastated Hiroshima in 1945, experts in Seoul said.

Pyongyang's state media said the test, which comes after a series of ballistic missile launches, had realised the country's goal of being able to fit a miniaturised warhead on a rocket.

"Our... party sent a congratulatory message to our nuclear scientists... for conducting the successful nuclear warhead explosion test," said Ri Chun-Hee, a veteran who has delivered all the North's biggest announcements.

The news drew swift condemnation from US President Barack Obama who warned of "serious consequences" and said he had called the leaders of South Korea and Japan to confer over the crisis.

The South's President Park Geun-Hye spoke out against the "maniacal recklessness" of Kim, who since taking control after the death of his father in 2011 has carried out a series of purges and weapons tests designed to show strength and consolidate power.

"Kim Jong-Un's regime will only earn more sanctions and isolation... and such provocation will further accelerate its path to self-destruction," Park said.

US Secretary of State John Kerry and his Russian counterpart Sergei Lavrov, meeting in Geneva, said they would refer the matter to the United Nations.

News of the test emerged when seismic monitors detected a 5.3-magnitude "artificial earthquake" early Friday near the Punggye-ri nuclear site, where the last test took place in January.

"The 10-kiloton blast was nearly twice the (power of the) fourth nuclear test and slightly less than the Hiroshima bombing, which was measured about 15 kilotons," said Kim Nam-Wook from the South's meteorological agency.

If Pyongyang can make a nuclear device small enough to fit on a warhead, and bolster the range and accuracy of its missiles, it might achieve its oft-stated aim of hitting US targets. But its claims to that in the past have been discounted.

However, North Koreans who gathered around public screens to watch the official announcement of the test -- which came on the 68th anniversary of the country's founding -- were bullish.

"Though the US imperialists are running amok, we fear nothing as our military power has strengthened further," one woman told AFP in Pyongyang.

Outside experts said authenticating North Korea's claim to have created a weapon-tipped missile would be difficult.

"It's not really possible for us to verify that the test was of a compact warhead from the seismic data," said Melissa Hanham, a North Korea expert at the Middlebury Institute of International Studies.

"We would need to see it tested on a missile, like China did in the 1960s. Nobody wants to see that. There is no way they could do that test in a safe way, and it could easily start a war."

Japan condemned the test as "absolutely unacceptable" while the head of the UN atomic watchdog said it was a "clear violation" of numerous Security Council resolutions.

North Korea has been hit by five sets of United Nations sanctions since it first tested a nuclear device in 2006, but has insisted it will continue, come what may.

The nuclear programme has gone alongside a series of ballistic missile launches; the latest of which took place on Monday even as world powers gathered for a G20 meeting in China.

This week's events are yet another slap in the face for Pyongyang's chief ally, China, which has been under pressure to rein in its increasingly embarrassing neighbour.

China said Friday it "firmly opposes" the test, but it has limited room to manoeuvre, given its priority is to avoid a collapse of the regime that would create a crisis on its border and shift the balance of power on the Korean peninsula towards the US.

The US-Korea Institute at Johns Hopkins University said the latest development made plain that the US and South Korean strategy on restraining North Korea "has clearly failed".