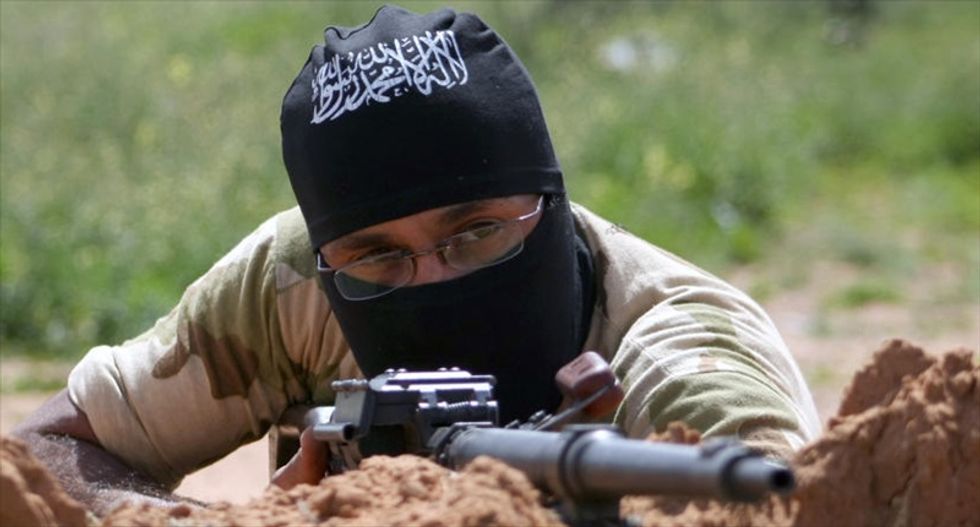 Rebel fighters take part in a training session in the northeastern city of Deir Ezzor, on March 25, 2014. (By Ahmad Aboud for Agence France-Presse.)

President Barack Obama has admitted his inability to end Syria's brutal civil war still haunts him, but insisted his refusal to put his hand on the scales was the right choice.

In an interview with celebrated presidential historian Doris Kearns Goodwin, published Wednesday, Obama cited Syria when asked about difficult choices during his eight years in office.

"There are always things that I think I wish I could have done better," Obama said as he prepares to leave the White House this January.

"But there aren't a lot of situations where I look back and I say, the decision I actually made or the course we actually pursued was the wrong course."

A "good example of that is the situation in Syria, which haunts me constantly," he added.

Obama has been pilloried for his refusal to step in to end a conflict that has killed 300,000 people, allowed Russia and Iran to assert their power in the Middle East and created a refugee crisis that has destabilized Europe.

"I would say of all the things that have happened during the course of my presidency, the knowledge that you have hundreds of thousands of people who have been killed, millions who have been displaced, [makes me] ask myself what might I have done differently along the course of the last five, six years."

But, reiterating a long-made point, he said the options for toppling Bashar al-Assad were woeful.

"The conventional arguments about what could have been done are wrong. The notion that if we had provided some more modest arms to Syrian rebels -- that somehow that would have led to Assad's overthrow more decisively.

"The notion that if I had taken a pinprick strike when the chemical-weapons issue came out, as opposed to negotiating and getting all those chemical weapons out -- that that would have been decisive. All those things I tend to be skeptical about.

"But I do ask myself, was there something that we hadn't thought of? Was there some move that is beyond what was being presented to me that maybe a Churchill could have seen, or an Eisenhower might have figured out?"

Obama's policy in Syria has focused on trying to get Russia to use its supposed influence over Assad to end the war.

A series of US-Russia ceasefire deals have failed.

Russia's deployment of ground troops to Syria and a sustained bombing campaign targeting rebels and jihadists has stopped the collapse of the regime and turned the tide of the war in Assad's favor.