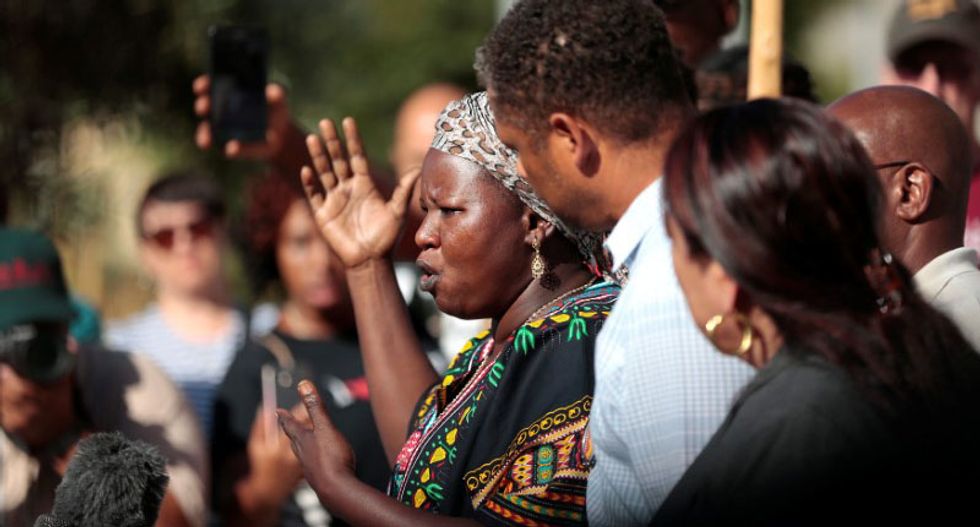 Protesters yelled "murder" and demanded a federal investigation on Wednesday after a police officer in southern California shot and killed an unarmed black man, less than two weeks after similar incidents sparked outrage in two other U.S. cities.

In the latest shooting, two officers responded to calls about an African-American man in his 30s walking in traffic and "not acting like himself," according to police in El Cajon, a city of about 100,000 residents some 15 miles (24 km) northeast of San Diego.

Police did not immediately identify the victim, but local activists and friends named him as Ugandan-born Alfred Olango. They said he was mentally ill and that he may have been suffering a seizure in the moments before his death.

Days earlier, in Charlotte, North Carolina and in Tulsa, Oklahoma, police and shot and killed black men, igniting demonstrations against racial bias in U.S. policing and demands for greater accountability for officers.

In Charlotte, rioting prompted the authorities to impose a state of emergency and curfew.

El Cajon officers found Olango behind a restaurant at about 2 p.m. PDT (2100 GMT) on Tuesday and ordered him to remove his hand from his pocket. After he refused, one officer drew a firearm and the other readied a Taser device, police said.

Olango paced back and forth as the officers tried to talk to him with their weapons pointed at him, police said.

Police said Olango then pulled an object from his front pants pocket, placed both hands together and extended them toward an officer in "what appeared to be a shooting stance."

The officers simultaneously shot and used the Taser on the man, who died after being taken to the hospital, police said.

No weapon was found at the scene, El Cajon Police Chief Jeff Davis told reporters. He did not say what the man was pointing.

"Now is a time for calm," Davis said. "I implore the community to be patient with us, work with us, look at the facts at hand before making any judgment."

The officers were placed on administrative leave, which is standard procedure in such cases.

Civil rights activists and as many as 300 protesters gathered on Wednesday outside the El Cajon police department, where they chanted "murder," "justice for Alfred Olango" and "black lives matter."

"We are not going to stop until we get justice," Reverend Shane Harris, president of the National Action Network's San Diego chapter, said at the demonstration. "We do not trust local prosecutors to investigate local police."

Agnes Hassan, a refugee from Sudan, told the rally she had spent time in a refugee camp with Olango before they both moved to the United States.

"We suffered too much with the war in Africa, and we come here just to suffer again?" she said. "My heart is just broken."

In video posted on social media showing the moments after the shooting, a woman who says she is the victim's sister is heard saying she phoned police.

"Oh my God. You killed my brother. I just called for help and ... you killed him," the unidentified woman said, sobbing.

Police released a still photo from the video that appeared to show two officers pointing weapons at a man who was aiming an object at them.

Lieutenant Rob Ransweiler, an El Cajon police spokesman, said the officer who used the Taser was "highly trained" in handling mental health emergencies. He said he did not know the training background of the other officer.

The San Diego District Attorney was investigating the shooting, and Ransweiler said the video filmed by the bystander could be released once that investigation is completed.

"We're trying to be as transparent as possible," he said.