Rep. Steve King: Only 'natural families' should get a child care tax credit -- not LGBT families 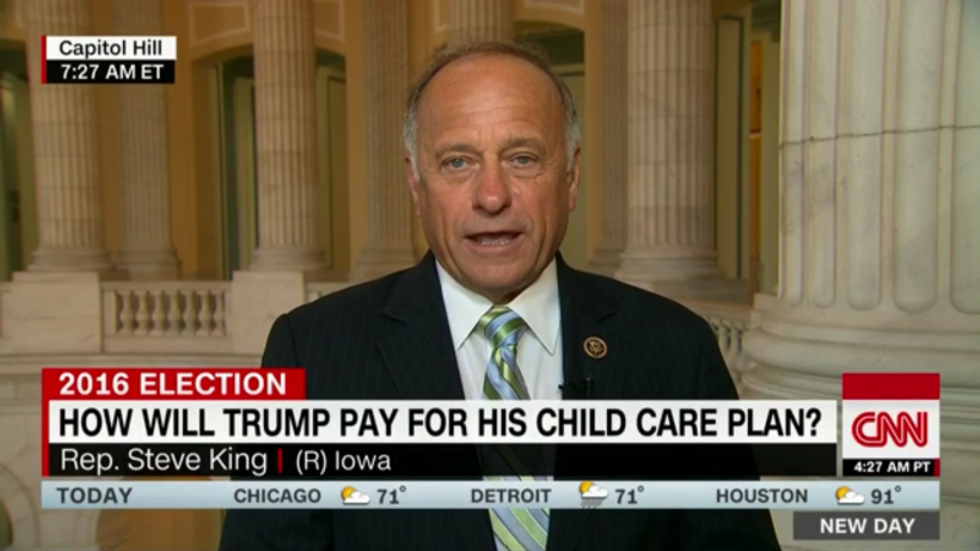 Donald Trump unveiled something resembling a plan to give new parents a child-care tax credit, but one of his strongest supporters already sounds wary of it.

While being interviewed by CNN's Chris Cuomo on Wednesday, Rep. Steve King (R-Iowa) expressed skepticism about whether Trump could really find enough money to pay for his plan just by eliminating "waste, fraud and abuse" in unemployment insurance.

Even more interesting, however, was King's assertion that only "natural families" ought to benefit from the proposed policy.

In other words: No gay people need apply.

"I want to respect all people, but I want to promote the natural family, Chris, and I think that's the most wholesome thing we can do," King said. "The natural family is a man and a woman joined together in -- hopefully -- holy matrimony, blessed by God with children."

Cuomo then pointed out research showing that families adopted by LGBT families are doing just as well as they are in "natural" families. King then went off on a bizarre tangent questioning the validity of such research and noting that scientists have also told us the climate change is real.

Then he went right back to dumping on gay people's abilities to successfully raise "wholesome" children.

"I want to respect all human persons who are all gifts from God," he said. "But I want to encourage the natural family. That's the best and most wholesome way to raise a child and that's been the case throughout thousands of years of human history and we need to go with what works."