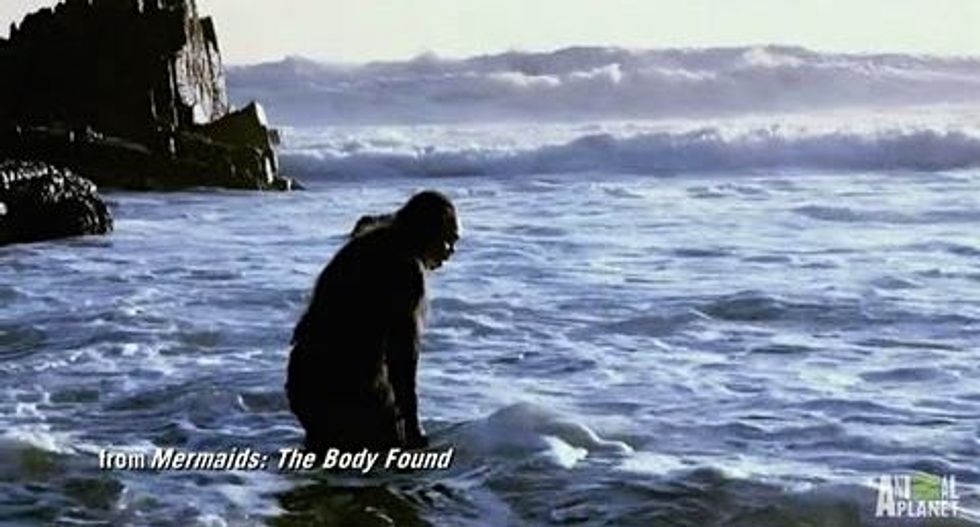 Occasionally in science there are theories that refuse to die despite the overwhelming evidence against them. The “aquatic ape hypothesis” is one of these, now championed by Sir David Attenborough in his recent BBC Radio 4 series The Waterside Ape.

The hypothesis suggests that everything from walking upright to our lack of hair, from holding our breath to eating shellfish could be because an aquatic phase in our ancestry. Since the theory was first suggested more than 55 years ago, huge advances have been made in the study of human evolution and our story is much more interesting and complicated than suggested by the catch-all aquatic ape hypothesis.

In 1960, marine biologist Alister Hardy published an article in New Scientist, titled: Was man more aquatic in the past? He re-told the familiar tale of the evolution of land animals from ancient fish, and then considered the return of various groups of reptiles, birds and mammals to an aquatic existence: ichthyosaurs and plesiosaurs, crocodiles, sea-snakes, penguins, whales, dolphins and porpoises, manatees and dugongs, and seals – as well as polar bears, otters and water voles, who hunt in water. Then he suggested that many of the unique characteristics of humans and their ancestors, marking them out as different from the other apes, could be explained as adaptations to spending time in water.

Hardy put forward all sorts of features which could be explained as “aquatic adaptations”: our swimming ability – and our enjoyment of it; loss of body hair, as well as an arrangement of body hair that he supposed may have reduced resistance in the water; curvy bodies; and the layer of fat under our skin. He even suggested that our ability to walk upright may have developed through wading, with the water helping to support body weight.

For Hardy, this aquatic phase would have occupied the gap in the fossil record that then existed – between around 4m and 7m years ago. He sensibly concluded his paper saying that this was all only speculation – a “hypothesis to be discussed and tested against further lines of evidence”.

A modern day aquatic ape. But there’s no trace of true ‘aquatic apes’ in our ancestry.

In the 50-odd years since the presentation of this hypothesis, it has enjoyed a certain fame – or perhaps notoriety. The writer Elaine Morgan championed it in her book The Aquatic Ape, and developed the hypothesis further, marshalling a seemingly impressive range of characteristics to support it, including breath control and diet. It seems such a tantalising and romantic idea – but a closer look at the evidence reveals it to be little more than that.

Pouring cold water on it

All the suggested anatomical and physiological adaptations can be explained by other hypotheses, which fit much better with what we actually know about the ecology of ancient hominins. Hairlessness, for instance, is only a feature of fully aquatic mammals such as whales and dolphins. Semi-aquatic mammals such as otters and water voles are extremely furry. Sexual selection and adaptations to heat loss better explain our pattern of body hair. Sexual selection may also explain our body fat distribution, which differs between the sexes. Voluntary breath control is more likely to be related to speech than to diving.

Otters evolved from land animals but never lost their fur.

The diet of many of our ancestors certainly included marine resources – where people lived on the shores of lakes or the sea. But this was a relatively late development in human evolution, and humans can also survive and thrive on food obtained entirely on land. Compared with other animals, we are not actually that good at swimming, and our skin leaks as well, letting in water so that our fingers become prune-like after a long bath.

What about walking on two legs? That’s something all apes do a bit of – while wading in water, certainly, but also while reaching for fruit, performing aggressive displays or simply moving around in trees. If we evolved from ancestors who already stood up in trees, we don’t need an extraordinary explanation for why we ended up standing on the ground rather than running around on all fours.

Hands up if you can stand on dry land.

Since Hardy and Morgan’s hypothesis was advanced, many of the gaps in the human fossil record have been filled, with at least 13 new species found since 1987. We have also made great strides in reconstructing the environment in which our ancestors lived. And we know that species as far as part in time as Sahelanthropus tchadensis 7m years ago and Homo erectus 2m years ago all lived in forested or open woodland environments. While some of these woods included wetland, this was just part of the mosaic of habitats that our ancestors learned to survive in, and there is absolutely no trace of a hominin ancestor as aquatic as that described by Hardy and Morgan.

We also have evidence our ancestors had to survive periods of extremely dry climate with little or no aquatic resources. Coping with these highly variable, patchwork environments required behavioural flexibility and co-operation, and our large brains and ultra-social nature likely emerged as a result. This flexibility ultimately led to the invention of culture and technology.

Recent proponents of the aquatic ape hypothesis have pointed to much later watery adaptations, including early archaeological sites where humans have been shown to be exploiting coastal resources. But these don’t have much to say about the origins of bipedalism, more than 6m years before – they just demonstrate the behavioural flexibility of later hominins.

Too extravagant and too simple

The original idea, and certainly Elaine Morgan’s elaboration of it, became an umbrella hypothesis or a “Theory of Everything”; both far too extravagant and too simple an explanation. It attempts to provide a single rationale for a huge range of adaptations - which we know arose at different times in the course of human evolution. Traits such as habitual bipedalism, big brains and language didn’t all appear at once – instead, their emergence is spread over millions of years. It’s nonsense to lump them all together as if they require a single explanation.

Despite the evidence stacked up against the theory, it is strangely tenacious. It has become very elastic, and its proponents will seize hold of any mentions of water, fish or shellfish in human evolution, and any archaeological sites found near coasts, rivers and lakes as supporting evidence. But we must always build our hypotheses on, and test them against, the hard evidence: the fossils, comparative anatomy and physiology, and genetics. In that test, the aquatic ape has failed – again and again.

It is a great shame the BBC recently indulged this implausible theory as it distracts from the emerging story of human evolution that is both more complex and more interesting. Because at the end of the day science is about evidence, not wishful thinking.