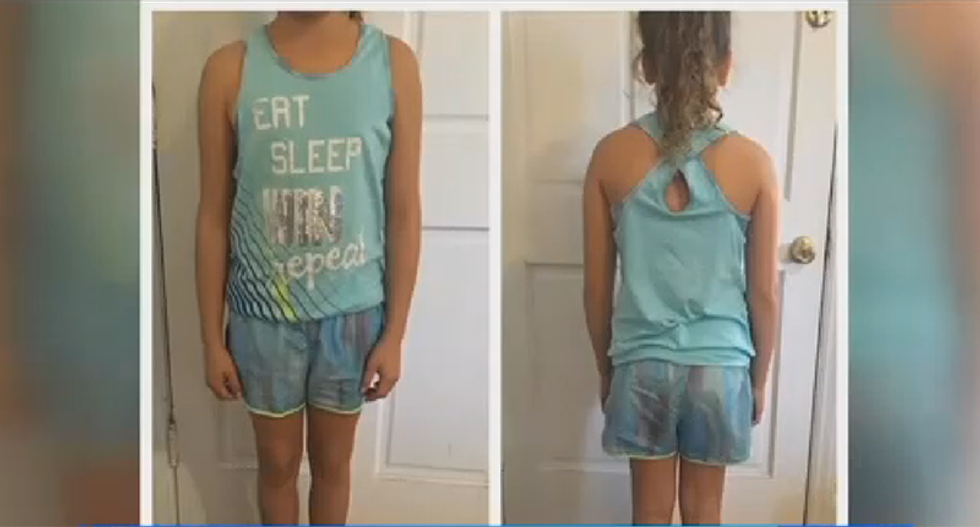 The Riverview Elementary School's website says that tank tops are not acceptable school attire, but Alicia Rogers didn't see anything wrong with the shirt she sent her 10-year-old daughter wearing.

According to a WBTV report, Rogers, who works for the network, said that the school didn't call her when her daughter's teacher found the shirt objectionable. Instead, she learned of the infraction when she picked her up at school that afternoon.

"I turned around and looked at her and saw how upset she was, and she was starting to have tears," Rogers told WBTV.

The 5th grader said that her teacher made her wear a jacket on the playground to cover her shoulders in the sweltering South Carolina heat.

"The humiliation she felt with kids coming up to her asking her why she was wearing a jacket while sweating," Rogers said.

When Rogers spoke to the principal there was no resolution. "The teacher said to me, 'it was the fact that she had the criss-cross straps in the back.' and I asked, 'I didn't see that in the dress code,'" said Rogers.

Dress codes often target girls and young women with prudish requirements for length of shorts and skirts and restrictions against showing shoulders. These rules operate on the assumption that if girls don't dress more modestly they will become a distraction to male classmates. Many women's rights activists believe it unfairly places blame on girls for the bad behavior of boys.

Rogers is demanding an apology from the school for humiliating her and shaming her. She's also asking that the district implement a policy that they will telephone parents immediately if teachers have problems with a child's clothing.

"The school's administration and parents have had an open dialogue regarding the parent's concerns," the statement read. "The matter is being resolved at the school level between the parents and administration."

Rogers also hopes she can teach her daughter the lesson of standing up for herself.

"I wanted to take this situation where she felt completely powerless, and I wanted to give her a chance to kind of turn that into empowerment to stand up," Rogers said.

The girl's mother plans to speak at the next Fort Mill School Board meeting about what happen and find solutions so it never occurs again.

Last year, girls started the hashtag #IAmMoreThanADistraction to fight dress code policies that disproportionately attack girls because their skin is a "distraction" to boys in school. They tried to bring awareness for schools and administration that instead, they should teach male students and teachers not to over-sexualize female body parts.