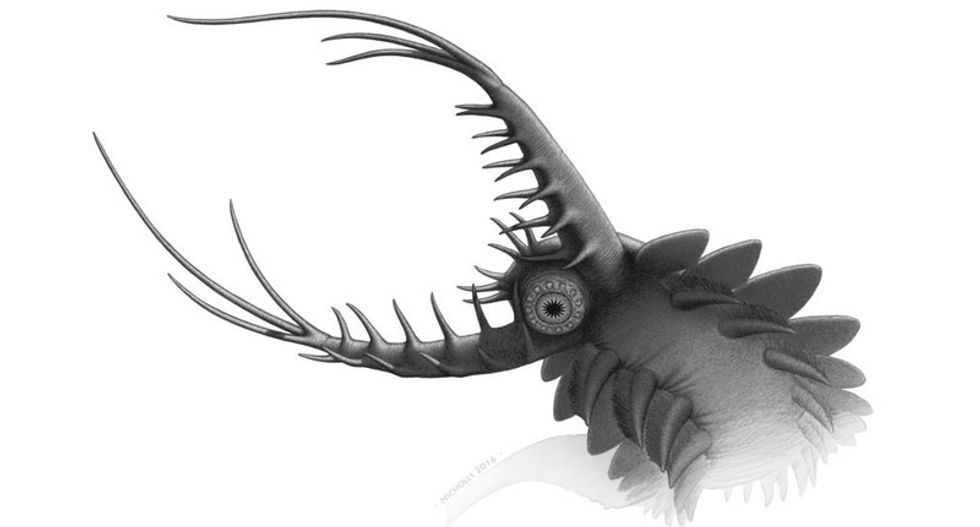 The ancient oceans of Earth were filled with monstrous beings. Long before sharks or whales – 520m years ago – there were carnivorous, swimming beasts that resembled giant bizarre crustaceans, and huge, spiny insect-like creatures that scuttled along the ocean floor.

We know about these prehistoric animals because of the fossils they left behind. But because these imprints are often incomplete, we sometimes have to guess the details of exactly what the creatures looked like. But a new complete fossil we found has helped solve a mystery about the origins of a certain type of scary-looking mouth. We now know it was shared by several different extinct creatures and can still be found in living animals today.

Diverse animal life suddenly appeared on Earth about half a billion years ago in the Cambrian period (542m to 488m years ago). One explanation for this is that an increase in the amount of oxygen in the air and oceans enabled carnivorous predators (which need more oxygen to support their active lifestyles) to evolve for the first time.

This spurred an evolutionary arms race during which animals evolved skeletons to protect themselves or to help them attack their prey more efficiently. In the seas, some creatures learned to burrow to safety in the sand and mud or evolved pelagic (swimming and floating) lifestyles to escape predators.

Some of the largest predators in the Cambrian period were primitive members of the arthropods, the group of animals that today includes insects, spiders and crustaceans. These nektonic (free swimming) predators were called anomalocaridids. Each had a set of swimming flaps down its body, a pair of large stalked, compound eyes on the head, a set of segmented grasping appendages and a circular mouth apparatus. This mouth was made up of rings of plates and teeth, and was remarkably similar to that of the “sarlacc” monster in the film Star Wars: Return of the Jedi.

When the first anomalocaridid fossils were found, they were thought to be the remains of several different animals. The head appendages were interpreted as the tail of a shrimp, the body a sea cucumber, the mouth a jelly fish. However, painstaking analyses in the 1980s of the Burgess Shale fossils from Canada showed that they were a single animal and, at 70cm long, it was the largest known to have lived in the Cambrian period.

When what appeared to be a giant anomalocaridid mouth was found on its own in 1994, researchers used it to argue that some anomalocaridids must have been up to two metres in length. But in 2006, other scientists argued that the mouth was more similar to that of a distantly related group of animals known as priapulans. The modern day “penis worm” (named after its shape) is in this group and can grow up to tens of centimetres long in today’s oceans. But the researchers imagined the fossil mouth must have belonged to a giant priapulan they named Omnidens.

But we have now described new fossils that show both these theories are wrong – and right. The fossil comes from another exceptional site in the northernmost part of Greenland, called Sirius Passet, and is of a more primitive relative of the anomalocaridids known as Pambdelurion. It had large grasping appendages on its head and flaps on the body but had not evolved the unique appendage joints that arthropods have. However, we did find that its mouth was the spitting image of that of Omnidens, formed from the same three kinds of teeth and plates in the same circular arrangement.

So it turns out that this kind of mouth was shared by anomalocaridids, Omnidens and Pambdelurion, as well as today’s penis worms, and was present in their latest common ancestor, which probably originated sometime just before the Cambrian (540m years ago). What’s more, we can now estimate that Omnidens grew to be 1.5 metres long. This is about twice the estimated length of any Cambrian anomalocaridid, which was previously thought to be the largest animal of the period.

This mouth worked with the robust grasping appendages and a complex digestive system to allow these creatures to effectively consume prey. This gave them a competitive edge in the brutal undersea world of the Cambrian. It was these kinds of features that helped shape the predatory arms race that accelerated the explosion of life on Earth and shaped the early seeds of modern biodiversity.