The psychology behind the unfunny consequences of racist and sexist jokes 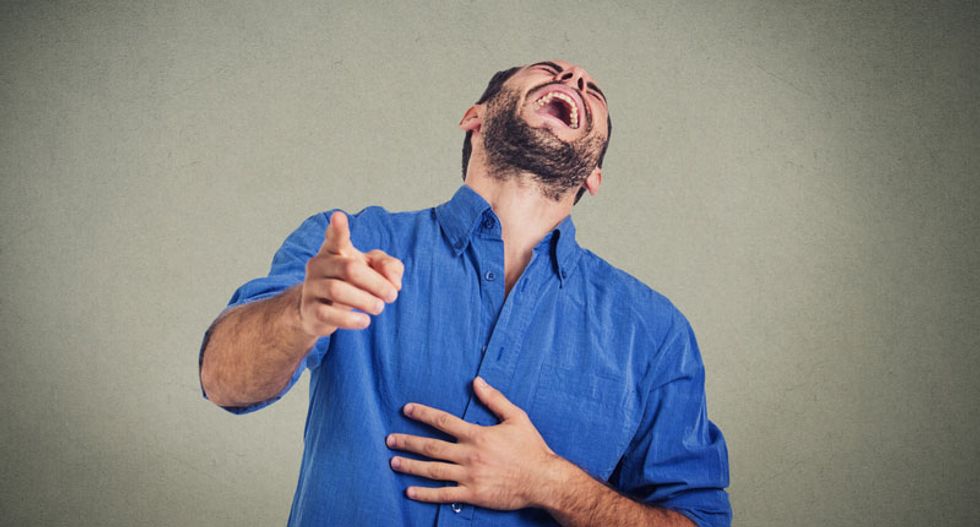 A man pointing and laughing (Shutterstock)

Q: Why did the woman cross the road?

A: Who cares! What the hell is she doing out of the kitchen?

Q: Why hasn’t NASA sent a woman to the moon?

A: It doesn’t need cleaning yet!

These two jokes represent disparagement humor – any attempt to amuse through the denigration of a social group or its representatives. You know it as sexist or racist jokes – basically anything that makes a punchline out of a marginalized group.

Disparagement humor is paradoxical: It simultaneously communicates two conflicting messages. One is an explicit hostile or prejudiced message. But delivered alongside is a second implicit message that “it doesn’t count as hostility or prejudice because I didn’t mean it — it’s just a joke.”

By disguising expressions of prejudice in a cloak of fun and frivolity, disparagement humor, like the jokes above, appears harmless and trivial. However, a large and growing body of psychology research suggests just the opposite – that disparagement humor can foster discrimination against targeted groups.

Most of the time prejudiced people conceal their true beliefs and attitudes because they fear others' criticism. They express prejudice only when the norms in a given context clearly communicate approval to do so. They need something in the immediate environment to signal that it is safe to freely express their prejudice.

Disparagement humor appears to do just that by affecting people’s understanding of the social norms – implicit rules of acceptable conduct – in the immediate context. And in a variety of experiments, my colleagues and I have found support for this idea, which we call prejudiced norm theory.

Sexist humor essentially stretched the rubber band; it expanded the bounds of acceptable behavior to include responses that would otherwise be considered wrong or inappropriate. So, in this context of expanded acceptability, sexist men felt free to express their antagonism without the risk of violating social norms and facing disapproval from others. Sexist humor signaled that it’s safe to express sexist attitudes.

In another study, my colleagues and I demonstrated that this prejudice-releasing effect of disparagement humor varies depending on the position in society occupied by the butt of the joke. Social groups are vulnerable to different degrees depending on their overall status.

Some groups occupy a unique social position of what social psychologists call “shifting acceptability.” For these groups, the overall culture is changing from considering prejudice and discrimination against them completely justified to considering them completely unjustified. But even as society as a whole becomes increasingly accepting of them, many individuals still harbor mixed feelings.

For instance, over the past 60 years or so, the United States has seen a dramatic decline in overt and institutional racism. Public opinion polls over the same period have shown whites holding progressively less prejudiced views of minorities, particularly blacks. At the same time, however, many whites still covertly have negative associations with and feelings toward blacks – feelings they largely don’t acknowledge because they conflict with their ideas about themselves being egalitarian.

Disparagement humor fosters discrimination against social groups – like black Americans – that occupy this kind of shifting ground. In our study, we found that off-color jokes promoted discrimination against Muslims and gay men – which we measured in greater recommended budget cuts to a gay student organization, for instance. However, disparagement humor didn’t have the same effect against two “justified prejudice” groups: terrorists and racists. Social norms are such that people didn’t need to wait for jokes to justify expressions of prejudice against these groups.

An important implication of these findings is that disparagement humor can be more or less detrimental based on the social position occupied by the targeted groups. Movies, television programs or comedy clips that humorously disparage groups such as gays, Muslims or women can potentially foster discrimination and social injustice, whereas those that target groups such as racists will have little social consequence.

On the basis of these findings, one might conclude that disparagement humor targeting oppressed or disadvantaged groups is inherently destructive and thus should be censured. However, the real problem might not be with the humor itself but rather with an audience’s dismissive viewpoint that “a joke is just a joke,” even if disparaging. One study found that such a “cavalier humor belief” might indeed be responsible for some of the negative effects of disparagement humor. For prejudiced people, the belief that “a disparaging joke is just a joke” trivializes the mistreatment of historically oppressed social groups – including women, gay people, racial minorities and religious minorities – which further contributes to their prejudiced attitude.

In addition, if one initiates disparagement humor with the positive intention of exposing the absurdity of stereotypes and prejudice, the humor ironically might have the potential to subvert or undermine prejudice.

Chris Rock is one comedian well-known for using subversive disparagement humor to challenge the status quo of racial inequality in the United States. For instance, in his opening monologue for the 2016 Academy Awards, he used humor to call attention to racism in the film industry and hierarchical race relations more generally:

I’m here at the Academy Awards, otherwise known as the White People’s Choice Awards. You realize if they nominated hosts, I wouldn’t even get this job. So y’all would be watching Neil Patrick Harris right now.

The problem is that in order for the humor to realize its goal of subverting prejudice, the audience must understand and appreciate that intention. And there’s no guarantee that they will.

Comedian Dave Chappelle described this interpretation problem in an interview with Oprah Winfrey in 2006. He discussed a skit in which he played a pixie who appeared in black face.

There was a good-spirited intention behind it. So then when I’m on the set, and we’re finally taping the sketch, somebody on the set [who] was white laughed in such a way – I know the difference of people laughing with me and people laughing at me – and it was the first time I had ever gotten a laugh that I was uncomfortable with. Not just uncomfortable, but like, should I fire this person?

Chapelle’s intentions with his racially charged comedy were misunderstood. By lampooning the stereotype, he meant to call attention to the ridiculousness of racism. However, it became apparent that not everyone was capable of or motivated to look past Chapelle’s comic stereotypical portrayal to get his subversive intent.

One study found that people higher in prejudice are particularly prone to misinterpret subversive humor. Researchers in the 1970s studied amusement with the television show “All in the Family,” which focused on the bigoted character Archie Bunker. They found that low-prejudiced people perceived “All in the Family” as a satire on bigotry and that Archie Bunker was the target of the humor. They “got” the true subversive intent of the show.