'This is unprecedented': Intelligence officials scorch Trump for blabbing about classified briefing 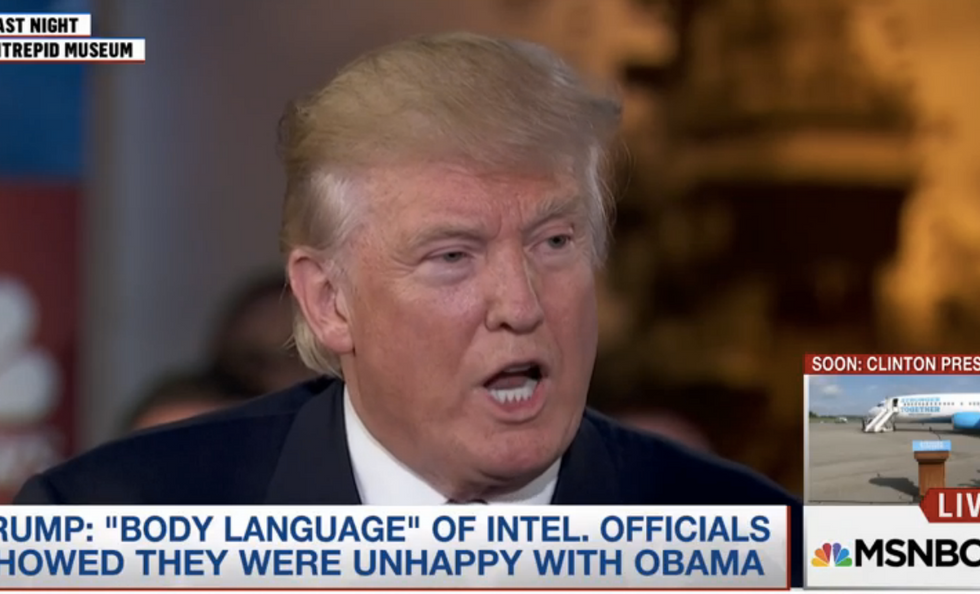 On Wednesday night during NBC's Commander-in-Chief Forum for the Democratic and Republican presidential candidates, Republican nominee Donald Trump attempted to make political hay from his Aug. 17 briefing with intelligence officials. The former reality TV star said that the unspoken message that he got from his briefers was that they didn't like or agree with President Barack Obama, citing the intelligence officials' "body language" as evidence.

The Washington Post said on Thursday that intelligence officials blasted Trump's loose-lipped approach to the briefing. Past and present intelligence professionals said that not only is it "unlikely" that the intelligence officers gave any indication to Trump about their feelings regarding the current president, but also that it is "unprecedented" that a presidential candidate would be so forthcoming about a classified briefing.

Trump told Matt Lauer at the forum, "I was very, very surprised. In almost every instance, and I could tell, I have pretty good with the body language [sic], I could tell, they were not happy. Our leaders did not follow what they were recommending.”

The Post's Greg Miller wrote, "The assertion was delivered as a throwaway line during a lengthy discussion of foreign policy. But among U.S. intelligence officials, Trump’s claim amounts to an accusation of a serious breach of professional ethics."

Former high-ranking CIA analyst Paul Pillar told the Post, "Those selected for this task would have been the most professional of an elite corps of intelligence officers. One of the last things they would do is express either verbally or through body language preferences” how they feel about the current administration in Washington.

Former CIA Director -- and Clinton backer -- Michael Morell said the remarks show that Trump has "got zero understanding of how intelligence works.”

To NBC, Morell said, "This is the first time that I can remember a candidate for president doing a readout from an intelligence briefing, and it's the first time a candidate has politicized their intelligence briefing. Both of those are highly inappropriate and crossed a long standing red line respected by both parties. To me this is just the most recent example that underscores that this guy is unfit to be commander in chief."

Intelligence analysts are trained to stay neutral and impartial and to not involve themselves or their work in domestic politics.

The Office of the Director of National Intelligence declined to comment on Trump's statements. However, other officials were quick to condemn the Republican candidate's attempt to exploit his access to classified information as a cudgel against his ideological opponents.

“This is unprecedented,” said former CIA officer David Priess -- who delivered daily briefings to senior officials in the George W. Bush administration. “We’ve had other presidential candidates mention that they got a briefing and talk in platitudes about it. We’ve never had somebody talk about what happened in a session.”

Sources within the Trump campaign have leaked information about the Aug. 17th briefing's side-show like atmosphere. Top advisor Gen. Mike Flynn reportedly kept interrupting the officials tasked with presenting the briefing to the Trump team and arguing with them.

At length, Gov. Chris Christie apparently laid a hand on Flynn's arm and told him to either "shut up" or "calm down" so that the briefing could proceed.