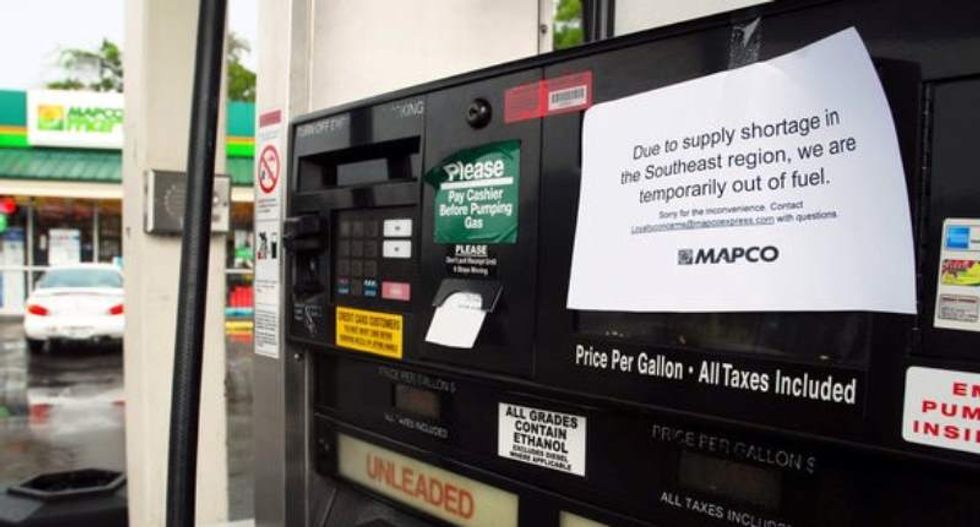 Out of fuel signs are pictured on gas pumps at a Mapco gas station at Spence Lane and Lebanon Pike in Nashville, Tennessee, on Sept. 17, 2016. (Reuters/David Mudd)

The largest gasoline conduit in the United States was partially shut down after a leak was discovered on Sept. 9 in Alabama, and motorists have since suffered long waits to fill up at forecourts across the southeast.

U.S. gasoline futures tumbled 5 percent on news of the restart. Gasoline futures had surged 9 percent and spreads had rallied last week after the leak.

The U.S. Department of Transportation Pipeline and Hazardous Materials Safety Administration (PHMSA) issued a written approval for restart of the line late Tuesday. Earlier in the day, Reuters reported that the approval was forthcoming, citing an official familiar with the matter.

The line carries 1.3 million barrels per day of gasoline from the refining hub on the Gulf Coast to the East Coast.

The line is expected to operate at reduced pressure around the damaged section, but the company said it could still maintain normal flow rates.

A Colonial spokesman declined to comment on the approval.

When Line 1 restarts, it will take several days for the fuel delivery supply chain to return to normal, and some markets served by the pipeline may experience "intermittent service interruptions," Colonial said.

Retail prices may continue to climb until supply kinks are straightened out.

Georgia has been the hardest hit, with gasoline prices rising 4.5 cents from Monday to Tuesday. At $2.361 per gallon of regular gasoline, the cost of fuel has risen by more than 25 cents in a week, compared with an increase of just over 3 cents nationwide, according to motorist advocacy group AAA.

"North Carolina is currently receiving about one-third of our normal supply of fuel," he said at a news conference in Charlotte on Tuesday.

The industry has sought to plug the supply gap with shipments by sea into the U.S. East Coast. Waterborne shipments rose by about 58 percent and volumes rose by 23 percent between Sept. 9 and Sept. 15 compared with the previous three weeks, according to data from Panjiva, a trade data company which tracks imports and exports.

About half of the 10 gasoline shipments to the East Coast during the period were from the U.S. Gulf, Panjiva said.