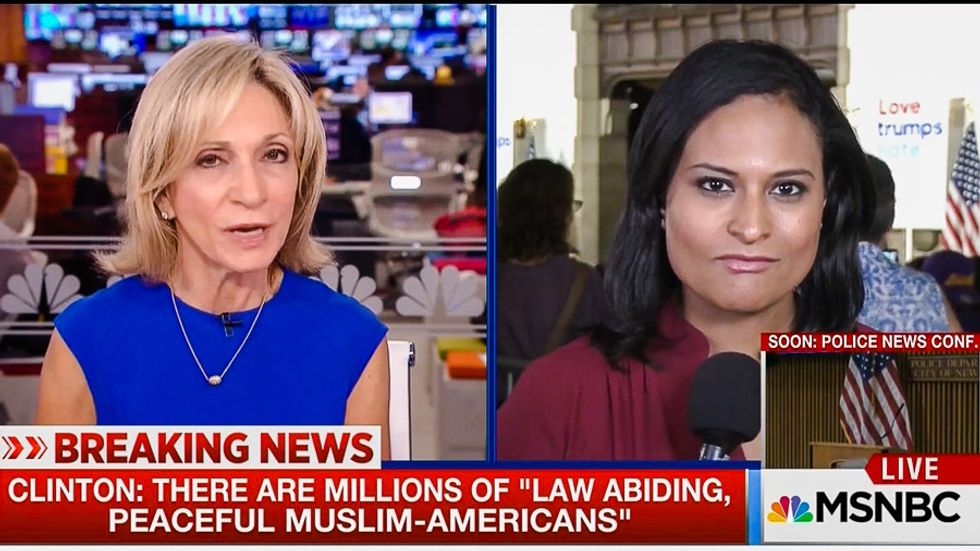 MSNBC host Andrea Mitchell enraged many of her viewers on Monday when she suggested that she favored Donald Trump's response to the plot to bomb areas of New York City and New Jersey.

After reviewing responses from both Clinton and Trump, Mitchell noted that the Republican nominee had been rewarded with a "tough persona" because of his harsh rhetoric in the wake of the 2015 terrorist attack in San Bernardino.

"This really does put Hillary Clinton on the spot," the MSNBC host opined. "She has campaigned on her resume, on her advantages having been part of the administrations -- secretary of state, a senator on Armed Services [committee] -- yet, Donald Trump is still communicating toughness in a way that she hasn't been able to."

"And she also is off message in that this was going to be the big roll out of her appeal to millennials, a real problem that she has in inspiring young people to come out in the numbers and percentages that they did for Barack Obama."

Andrea Mitchell tells me that terrorist attacks favor Trump. It was San Bernardino that gave him his "tough" persona.#whoknew
— digby (@digby) 1474303111.0

@mitchellreports @kristenwelker I hope U don't think U R doing honest reporting. Hillary prioritized correctly. All U want is a headline.
— BarbaraBuon (@BarbaraBuon) 1474303125.0

@mitchellreports trump is strong? how bout he uses terror for his own gain ? u wer just completely off base and selfish opinion is crap
— Capt Markus (@Capt Markus) 1474303194.0

Andrea Mitchell is a hack reporter, please retire and stop your bloviated opinions about the obvious, MSNBC needs to have joy Reid on MTP
— William Few (@William Few) 1474303279.0