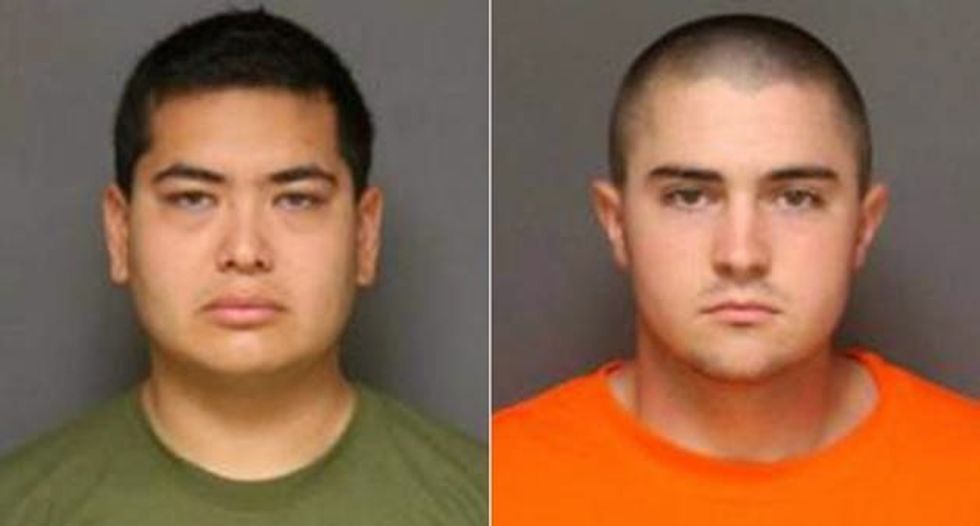 Two men were charged on Tuesday in the triple murder of a Southern California couple and their friend in what local media reported may have been a crime among the so-called "furry" community of people who dress up in animal costumes.

Joshua Acosta, 21, and Frank Felix, 25, were both charged with three counts of murder in the case and expected to make initial court appearances later on Tuesday, the Orange County District Attorney's Office said in a statement.

They are accused of killing Jennifer Goodwill-Yost, 39, her husband Christopher Yost, 34, and their friend Arthur Boucher, 28 at the couple's home in Fullerton early on Saturday.

The three victims were found shot to death in the home later that morning after a child called police to say her parents had died, Fullerton police said in a statement.

Two young children were found unharmed in the home but in the hours after the murder scene was discovered police said that Goodwill-Yost's 17-year-old daughter, Katlynn Goodwill-Yost, had gone missing.

Following the arrests of Acosta, of Texas, and Felix, of Los Angeles, police said that Katlynn Goodwill-Yost had been found safe and that a 17-year-old girl had been taken into custody in connection with the crime.

The Orange County Register newspaper reported that Jennifer Goodwill-Yost, her daughter and both of the suspects in the case have ties to the Southern California "furry" community, which is active on the internet, at conventions and other events.

"A lot of people in our community were devastated," Christopher Parque-Johnson, 23, told the newspaper. "I’ve been hearing from a lot of people. It bothered everybody."

The Register described Parque-Johnson as an artist and performer who was a member of the SoCalFurs who led a group of furries in placing flowers, cards and candles at the scene of the crime.

Katlynn Goodwill-Yost's social media pages are replete with pictures of her dressed in furry costumes.

"The suspects and the family are known to one another," Fullerton police spokesman Sergeant Jon Radus told reporters at a press conference. "This was not a random act of violence within the community. We do believe this was a specific home that was targeted by these suspects."