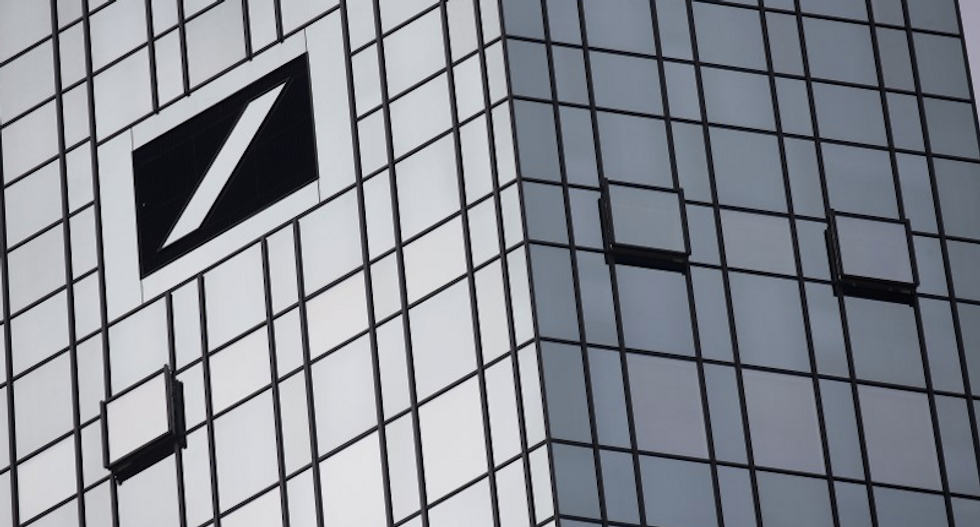 The U.S. Department of Justice is asking Deutsche Bank to pay $14 billion to settle an investigation into its selling of mortgage-backed securities, Germany's flagship lender said on Friday.

The claim against Deutsche, which is likely to be negotiated in several months of talks, far outstrips the bank's and investors' expectations for such costs.

While it is yet to become clear what the final payment will be, if it were to be as high as $14 billion, this would be a severe strain for Deutsche's fragile finances and would likely further rock investor confidence in the bank.

"Deutsche Bank has no intent to settle these potential civil claims anywhere near the number cited. The negotiations are only just beginning. The bank expects that they will lead to an outcome similar to those of peer banks which have settled at materially lower amounts", Deutsche Bank said in a statement on Friday.

The Department of Justice has taken a tough stance in settlement negotiations with other banks, requesting sums higher than the eventual fine.

In 2014, it asked Citigroup to pay $12 billion to resolve an investigation into the sale of shoddy mortgage-backed securities, sources said. The fine eventually came in at $7 billion.

In a similar case, rival Goldman Sachs agreed in April to pay $5.06 billion to settle claims that it misled mortgage bond investors during the financial crisis.

That settlement included a $2.39 billion civil penalty, $1.8 billion in other relief, including funds for homeowners whose mortgages exceed the value of their property, and an $875 million payment to resolve claims by cooperative and home loan banks among others.

Deutsche Bank's settlement will comprise a different list of recipients, a source close to the matter said, adding that the lender had already settled some claims three years ago.

A $14 billion fine, or even half that sum, would still rank among one of the largest paid by banks to U.S. authorities in recent years. In 2013, JPMorgan Chase & Co agreed to pay $13 billion to settle allegations by the U.S. authorities that it overstated the quality of mortgages it was selling to investors in the run-up to the 2008-2009 financial crisis. In 2014, Bank of America Corp. agreed to pay $16.7 billion in penalties to settle similar charges.

Deutsche Bank has not said what it has set aside in anticipation of a settlement over the sale and packaging of resident mortgage-backed securities before 2008. Its overall legal provisions stood at 5.5 billion euros at the end of the second quarter.

Deutsche was once one of Europe's most successful players on Wall Street. Like many of its peers, it has since faced a slew of lawsuits that often trace back to the boom years before the crash. Its litigation bill since 2012 has already hit more than 12 billion euros.

Claims filed by individuals, companies and regulators against Deutsche, outlined in the bank's 2015 annual report, relate to mis-selling of subprime loans and manipulation of foreign exchange rates or gold and silver prices. Other lawsuits are for the rigging of borrowing benchmarks Libor and Euribor, used to set the price of mortgages and derivatives.

These are the mortgages and FX cases, an investigation into suspicious equities trades in Russia and allegations of money laundering.