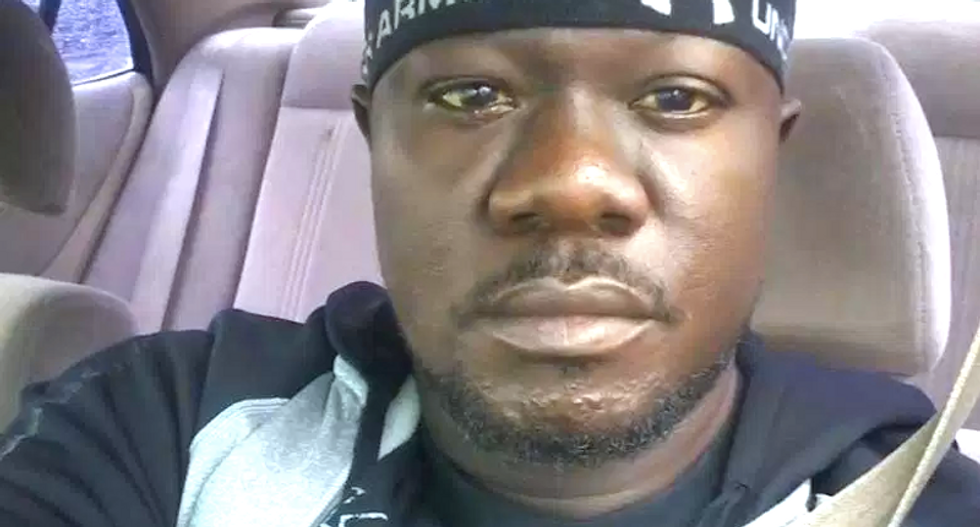 A Southern California police officer who shot an unarmed black man pointing a vape smoking device had been at the scene for less than two minutes when he opened fire, in a killing that set off two nights of protests, a police official said on Thursday.

Demonstrators have demanded a federal investigation into the Tuesday shooting.

The incident in the San Diego suburb of El Cajon came as racially charged anger over similar incidents in two other U.S. cities over the past two weeks had started to subside.

El Cajon officer Richard Gonsalves and a colleague on the police force, whose name was not released, were responding to calls about a mentally unstable man walking in traffic, officials said.

The two officers confronted the man, Alfred Olango, a 38-year-old former refugee from Uganda, near a restaurant.

Police said Olango ignored commands to take his hand out of his pocket before he pulled out an object later determined to be the smoking device. Olango assumed a "shooting stance" and pointed the device, police said. No gun was ever found.

Gonsalves opened fire and the other officer discharged a Taser device, said El Cajon police spokesman Lieutenant Rob Ransweiler, adding the officers were at the scene for less than two minutes.

Dan Gilleon, an attorney for Olango's family, accused the officers of improperly approaching Olango and escalating the situation.

"You certainly would never, ever walk up to a person and be as close as this officer (who fired) was if you believe he is a credible threat," Gilleon said.

Instead, the officers should have taken cover and talked to Olango from a distance to diffuse any tension, Gilleon said.

Friends and activists said Olango, who had convictions for drug and weapon offenses, may have been suffering a seizure in the moments before his death.

They also criticized police for not sending a Psychiatric Emergency Response Team (PERT), part of a county-wide program, to handle the situation. Police say that team had been dispatched to another incident.

The officers have been placed on administrative leave as El Cajon police and the San Diego County District Attorney's Office investigate the incident.

Olango, who attended high school in San Diego, recently moved back home from Arizona to be closer to his 16-year-old daughter and was living with family and working at a furniture company, Gilleon said.

A day or two before the shooting, he had suffered the death of a friend, Gilleon said.

"I don't know how much of that played into what was going on," Gilleon said.

Gilleon said Olango's family confirmed he had a history of mental health issues but it was unclear if he had received a diagnosis.

Police said they obtained a cell phone video recording of the shooting from a bystander, but authorities released only a still frame showing two officers aiming weapons at Olango as he pointed the vaping device at them.

Gilleon criticized the release of the image, saying it did not provide the full context of how police had handled the situation.