University of Chicago weighs free speech vs. crackdown on hecklers 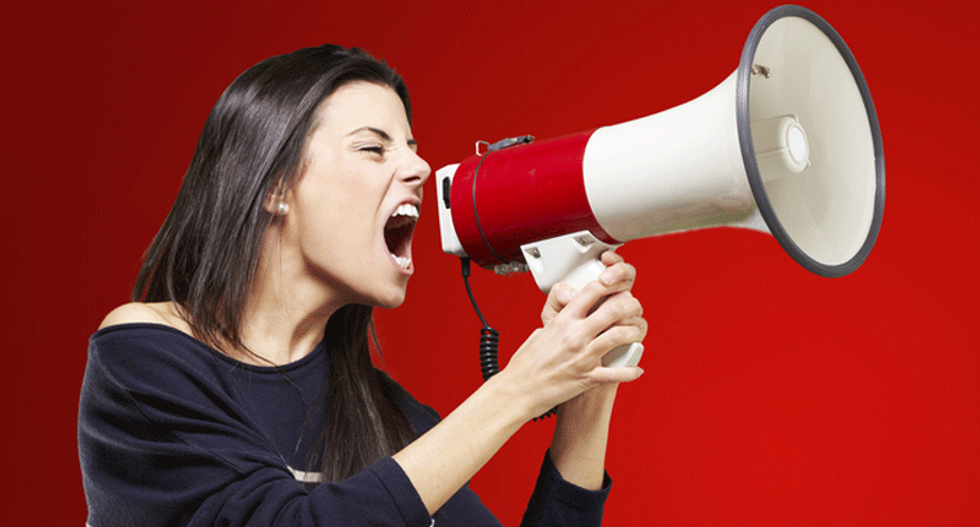 Woman shouting with a megaphone (Shutterstock)

Disruption of a local prosecutor's speech at the University of Chicago by hecklers unhappy with her handling of a police shooting may have been the last straw for administrators at one of the country's most prestigious schools.

After years of tolerating dissenters who shouted down unpopular speakers on campus, the school is now considering a policy of meting out suspensions, expulsions or other punishment for those it sees as violating free speech rights.

"I think the university is now signaling that we mean business here," said Jerry Coyne, an ecology and evolution professor and an outspoken critic of dissident students who he says are acting "entitled."

"What they're basically saying is, 'We have the right to harass anybody we don't like,'" Coyne, who is not a member of the faculty committee, said about the disrupters.

University rules already bar interfering with campus activities, but faculty and students said they could not recall them ever being enforced.

The panel is seeking ways to streamline a "cumbersome" student disciplinary system that dates back to the era of Vietnam War protests, according to a memo sent to faculty in June. The aim is to protect "freedom of expression, inquiry and debate" from interference, the memo says.

The proposal is the latest volley in a battle on U.S. university campuses over what constitutes free speech in an academic environment.

On the last question, the University of Chicago came out strongly last month in favor of giving faculty the right to decide if and when to warn students whenever lecture material might upset or offend some of them.

Students, for instance, have been known to object to lectures on novels containing scenes of sexual assault. In August the dean of students, Jay Ellison, sent a letter to incoming students saying that such "trigger warnings" were strictly optional.

He vowed the university would not cancel a talk or presentation no matter how much controversy it generated or how strongly some students objected.

Some students defend their right to heckle speakers they consider morally objectionable. They say that authority figures such as the prosecutor who spoke in February at the University of Chicago, Cook County State's Attorney Anita Alvarez, have many opportunities to speak their minds.

Alvarez, who took more than a year to charge a white police officer who fatally shot a black teenager in 2014, has drawn harsh criticism in Chicago from Black Lives Matter supporters.

"In a world that is consistently silencing black voices, I think it's important to make ourselves heard in a way that we cannot be ignored," said Mary Blair, a University of Chicago sophomore who was part of the Alvarez protest.

In March, Alvarez lost a primary election. Her office did not respond to interview requests.

Located in the third-largest U.S. city, the University of Chicago, which dates to 1890, is highly ranked academically, lending its name to the "Chicago School" of economics.

President Barack Obama, who taught law there, has stood up for campuses hosting divisive speakers.

"If you disagree with somebody, bring them in and ask them tough questions," Obama told Rutgers University's commencement in May. He said students should not "shut your ears off because you're too fragile."

Rutgers in New Jersey is one of many U.S. schools that have canceled speeches in the face of protests in recent years. In March, hecklers shut down an event for Republican presidential nominee Donald Trump at the University of Illinois at Chicago.

At the University of Chicago, the chairman of the faculty committee, due to make recommendations by Dec. 15, said he is keeping an open mind about how to change the disciplinary system.

"We're not opposed to protest. We're opposed to disruption," said Randal Picker, a law professor. "These are university campuses; there should be a lot of activity on them."

Some students blasted the creation of the committee, calling it an attempt to discourage left-leaning causes.

"It comes from a place of reputation management, of wanting to preserve the university's image to alumni, to parents, and to try to control the issues that are on the university's agenda," said Cosmo Albrecht, a member of student government and a junior from San Antonio, Texas.

Maurice Farber, a senior who is president of the university's Israel Engagement Association, supports getting tough with disrupters but would not rule out heckling someone who denied the Holocaust, for example.

"It's very difficult for me to say that I wouldn't try to shut someone down who was spreading a message of hate," he said.