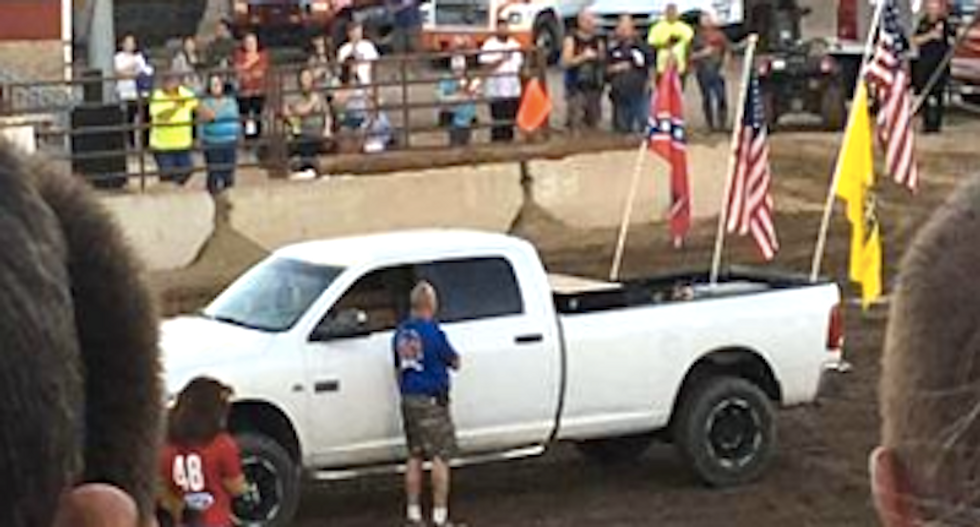 A Utah family sat out the national anthem when the organizers of a demolition derby included a Confederate flag for spectators to salute.

Daniel Argueta and his family decided to sit after a pickup truck displayed the Confederate flag and a Gadsden "don't tread on me" flag, in addition to two American flags, during a rendition of "The Star-Spangled Banner," reported Deseret News.

"You kind of get caught in, yes, you want to stand, you support the U.S. flag," Argueta told KSTU-TV. "You support the troops, you support police officers, but what is the Confederate flag doing there? For anybody that knows history and understands the negative impact of that flag and how it’s been used historically, it’s hard to stand up."

Argueta said other crowd members continued to stand during the salute, and his wife asked to leave afterward with their five children.

The event was sponsored by the city of West Jordan and organized by Stirrin' Dirt Racing, whose owner blamed one of the company's "helpers" for the incident.

"It wasn't politically correct, I'm sure, for some people, but there's some people who look at that flag and say this is the land of the free," said organizer Jim Simko. "It shouldn't have happened, but I can't, unfortunately, watch what everybody does at every minute."

Argueta disputes Simko's account, saying the Confederate flag was flying from the truck for about an hour before crowd members were asked to salute it.

The Gadsden flag, which originated during the Revolutionary War, has been appropriated as a symbol of the Tea Party movement.

The U.S. Equal Employment Opportunity Commission recently ruled that a worker's complaint about a colleague wearing a "don't tread on me" cap met the legal standard for investigation as a possible form of racial harassment.

Argueta's children understood the Confederate flag as a symbol of slavery, and the brother of two police officers found himself in the ironic position of silently sitting out the national anthem -- which some black NFL players have done to protest police violence and other systemic racism in the U.S.

"It was humiliating, it was demeaning, because with all the controversy going on with the flag recently and people sitting during the anthem, we had all intended to stand, but we couldn’t," Argueta said. "People probably looked around, probably wondering what we were doing."

The city asked Simko to remove the flag, which he did, and elected officials have apologized for the incident.

Simko has offered to have the driver apologize to anyone who was offended, and he offered free tickets to audience members who said they were offended.

"I honestly think that this is blown way out of proportion," Simko said.

Correction: The earlier version of this report identified Argueta as a police officer, based on information from a television report. Argueta has two brothers who works as police officers, but he does not.