WATCH LIVE: Protesters take to the street in Charlotte after night of unrest 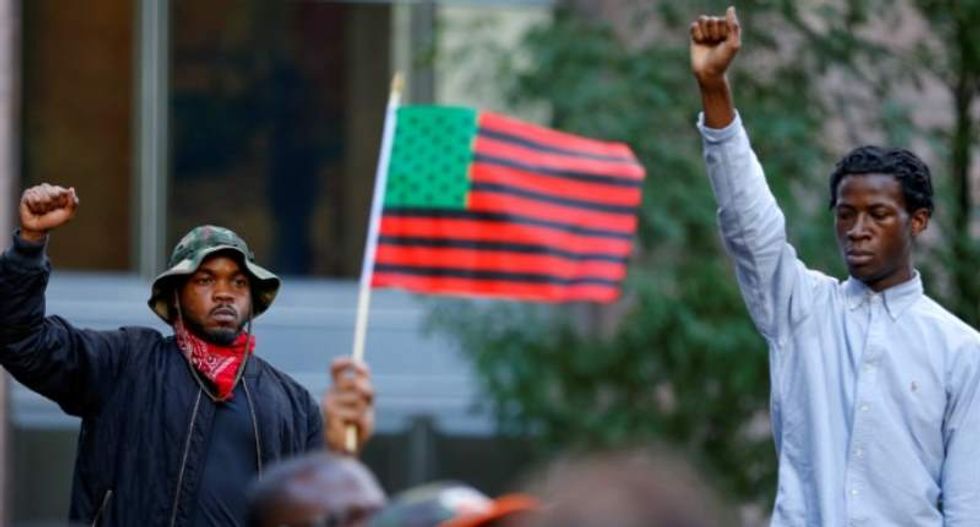 People gather at the intersection of Trade and Tryon Streets in uptown Charlotte, NC to protest the police shooting of Keith Scott, in Charlotte, North Carolina, on Sept. 21, 2016. (Reuters/Jason Miczek)

Broken glass and rocks hurled by protesters were gone from the streets of central Charlotte on Thursday but tension lingered after rioting over a police shooting that has shaken the U.S. banking hub.

City leaders encouraged business as usual in the upscale quarter known as "Uptown," where hours before violence had erupted around trendy restaurants, bars and clubs frequented by young financial professionals and sports fans.

People outraged over the fatal shooting of Keith Scott, 43, by a black officer in an apartment complex parking lot about 10 miles from Uptown took to the streets to protest what they saw as a tragic reminder of racial bias in policing in their city and country.

A state of emergency was in place after rioting on Wednesday and Thursday left about a dozen officers and protesters hurt, including a man who was shot and critically wounded.

Officials seeking calm expressed concern about the image of North Carolina's largest city, which has become a draw for conventions. Some banks advised staff to work from home.

“I don’t plan on leaving my room tonight," said Nancy Vincelli of San Diego, who was in town for a conference.

"No one wants to see Charlotte get busted up, but I would like to see them address the causes of this," Gray said.

Protesters smashed windows at the Charlotte Convention Center and at an office tower next to the NASCAR Hall of Fame. At least four businesses at the EpiCentre, a large, three-story entertainment venue, were damaged or looted.

By Thursday afternoon, the whine of power tools filled the air as workers covered broken windows with plywood. Charlotte economic and tourism officials have not yet attached a dollar amount to property damage and lost business.

The National Guard would help protect buildings, Putney said, freeing up police to more quickly react to protesters who break the law.

City officials opted against a curfew.

Jill Foster, 47, a Charlotte native working for one of the large banks whose skyscrapers dominate the city's skyline, did not agree with that decision.

"We need a curfew," she said, "because some of the young folks need to get off the streets."

WCNC-TV is also airing live coverage of the protest, which can be seen here.